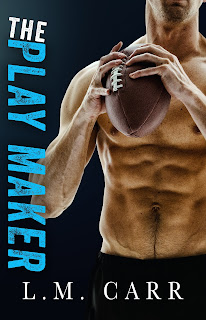 L.M. Carr is a new-to-me author and my first read from her is The Play Maker, a sports romance read from her new series, Sideline. This is a story about second chances between two people who were in love until one walks away in order to follow their dreams. The two people are Julian MacIntyre and Addison Hamilton, and it's Julian who leaves Addison behind because at that point in his life, football was his top priority and he intended to follow his dream. Julian goes on to become a gridiron god and earns the nickname "J-Mack", while Addison enters the world of sports journalism, making a name for herself as a woman in a male-dominated industry and is better know as "AJ". Over the years, they're lives move forward yet separate; that is, until Julian suffers a career-ending injury. But where one career ends, another begins, and Julian becomes the youngest coach in the NFL. Addison is assigned to be his interviewer in an exclusive one-on-one with her network, but she isn't too keen on the idea even if she doesn't have a choice. She intends to keep things professional, but Julian has other plans--he's playing for keeps.

I'm quite torn about this book because it had the sort of story line that I would usually enjoy. It had potential and before I started reading it, I was curious to find out the entire back story of Julian and Addison's break up and how they would handle their being thrown together by Julian's shifting from football player to football coach. Here's the thing: I didn't like Addison. I'm all for a woman embracing herself as a sexual being, but her treatment of Justin, a guy she was with in the first couple of chapters, left a bad taste in my mouth. And no, the whole "well, men do it, too" argument doesn't fly with me because it's inexcusable when they do it, so it's just as inexcusable when women do it. It also felt as if there were a couple of holes in the plot, but there was enough of the story that kept my attention. Julian was also a pretty good guy, redeeming himself for breaking Addison's heart twice. So, while there were things about the book that didn't quite hit the spot, there were still good things about it, and I'm curious to find out what story awaits Addison's brother. Just a quick note: there are triggers in this book with regards to sexual assault, so please be aware if you do intend on reading it. I'm awarding The Play Maker 3.5 stars. ♥