Review: Of Our Own Device by M.K. South 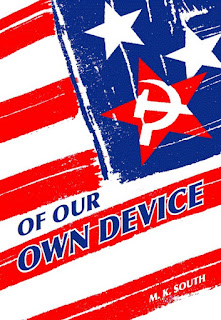 Note: A review copy was provided by the author via IndiGo Marketing & Design.

Writing book reviews in general isn't a simple thing, and I've been doing this for more than six or seven years, which is pretty short compared to a host of more "veteran" bloggers out there. In all my years of blogging, composing what I hope comes out as a critical review--as compared to what would be considered negative--never gets easy. It's been a couple of days since I finished reading Of Our Own Device by M.K. South, a book which took me three days to read and get through, and I'm still struggling to put my thoughts down in a way that won't come off as harsh. The main reason I was enticed to read this was the description of one reviewer, having compared this novel Aleksandr Voinov's Special Forces series and Tal Bauer's Enemies of the State, the first in his magnificent The Executive Office series. By the end of the book, I was left quite torn, which is why it's take days to write this review.

Of Our Own Device is a story that takes place during the end years of the Cold War and has an American operative  for the CIA named Jack Smith as its primary protagonist. In the Summer of 1985, Jack is posted in the American Embassy in Moscow and is tasked to ascertain who among the individuals he encounters will make viable and trainable spies in the Soviet Union. He comes across Eton May Volkonsky, a physics student who excels in other fields and was the son of an American father and Soviet mother. Jack strikes a friendship with Eton and his close-knit circle of friends, but even as Jack and Eton grow closer, Jack can't quite shake his suspicions that Eton and company have ties to the KGB. He also can't shake his attraction to the younger man, an attraction that's very much mutual, but it's one that neither man knows what to do with. Maybe separation will bring clarity...or closure.

Let me begin this section of my review by tipping my hat off to the author for exemplary research on their part, allowing them to write--and rather well at that--in a manner in which I could picture everything in my head. M.K. South has the tools to weave a story worth telling and to create characters you want to see evolve. Jack and Eton headlined a cast of characters that intrigued me, and South brought together elements of suspense and action and a dash of romance, all of which I appreciated. However, the book falters because it has too much of everything, and too much of anything isn't always a good. I wish it had been edited better and tapered down or made into a multi-part series. For as long as this was, I'd hoped for a more definitive ending, but I'll take the one that leaves a kindling of hope for a future for Jack and Eton. Of Our Own Device held promise, but one not fully kept. Three stars. ♥

Purchase Of Our Own Device on Amazon.