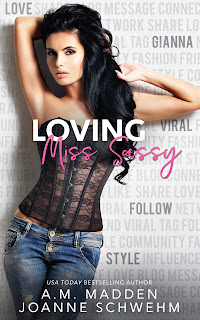 I knew going into Loving Miss Sassy that it was part of the Mr. Wrong series, so even though I have a thing about reading a series in order, I bit the bullet and read this fifth one and I'm glad I did. I've read books penned by A.M. Madden and Joanne Schwehm before, but this is my first read from them as a writing duo. Here we've got an enemies-to-lovers romance between Gianna Benedetto and Colton Teller. She's considered one of the most sought-after social media influencers in the country and he's considered a guru in the world of advertising. They're  roommates who are now competing for the same job and are going for it with two different mindsets. Gianna is all about technology and the here and now while Colton is more old school, preferring to go with the tried and tested. Neither one is willing to give up this shot, but will either of them give in to the attraction brewing between them?

This was a really fun read, with a whole lot of delicious tension between the main characters. Gianna was feisty and confident and wasn't going to allow anyone to make her feel anything less than the woman she knew she was and was capable of being. On the other hand, Colton had a bit more relaxed vibe to him and he turned out to be the perfect counterbalance to Gianna. The book itself works pretty well as a standalone, but again, with all the recurring characters showing up, I did feel a wee bit lost at times because it's as if I'm the clueless one who knows nothing about them. See, this is why prefer reading books in order--consider the first four books now on my never-ending to-be-read list--but setting that aside, the story itself was still a wholly entertaining one, and I did enjoy Gianna and Colton and seeing how their relationship would evolve as their professional and personal lives became entangled. A.M. Madden and Joanna Schwehm clearly have writing chemistry here. 4.5 stars for Loving Miss Sassy. ♥