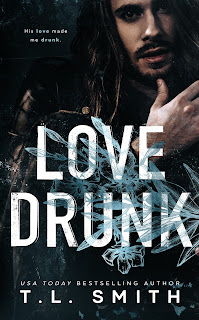 Love Drunk is the first novel in the Love Me duet, and it also happens to be my first ever read from T.L. Smith. It's the story of twenty-five-year-old Everly Thorne and thirty-year-old Gunner Reid, and I'm feeling rather torn and confused about what I read. Everly is swept away by everything Gunner, and she aptly describes herself as being drunk in love with this enigmatic yet magnetic man. In a short amount of time, she's fallen for him, but could she be setting herself up for a rude awakening? Will this love leave her with a hangover or wishing it was simply over?

I've given myself a few hours to ruminate about how this book makes me feel, and to be honest, I'm still at a loss. I was excited to get my hands on this because I've heard good things about T.L. Smith. Indeed, Smith has a way with words, and I can see why she has the following that she does as well as being a bestselling author. Now, this being the first book in a duet, I was already expecting the cliffhanger ending, but I think because there are quite a few unresolved issues and I'm left with more questions than I'd anticipated, I'm feeling rather on the fence about it all.

Everly was a woman who lived in this bubble of privilege and naivete, and while she says that she wants to break free from having her family--her father in particular--control her life, she simply handed the reins over to someone like Gunner. But while Everly was a special snowflake, Gunner was more sociopath than anything else. And see, this is where I struggled--I felt no connection with these two, frustrated by both of them, what with Everly lacking conviction and not standing up for herself and Gunner being, well, an asshole who had become obsessed with her.

Now, while I may not have been a huge fan of either of the main characters, the story itself did intrigue me in as much as it did confound me, as did Alec, Everly's paternal uncle. You'll see why when you read this series starter.  This book is only the first part of the overall story, so I get that not all the pieces are there and that everything should fall into place in the second book. My curiosity has been piqued over the fact that you don't know what's true or not, as well as not knowing who you can and cannot trust. For now, though, I'm giving Love Drunk 3.5 stars. ♥