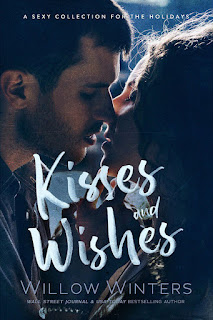 Kisses and Wishes is an anthology composed of three holiday-themed short stories from bestselling author Willow Winters. These are previously released stories, but since I've never read them in the past, I dove in and spent the next hour or so enjoying three quickie reads that will warm anyone up in what's already becoming chilly weather. All three stories proved to be entertaining and all standalones. I averaged my rating to four stars for the collection.

The first story is One Holiday Wish, which is about Carla and Michael. They were high school sweethearts who split up in college because of the distance only to become on-again, off-again hook-ups who were never really interested in being with anyone else except each other. This was both sweet and steamy with some comic relief courtesy of Carla's best friend. Carla and Michaels' story was a good start to the the anthology and is my favorite.

The third story is Stolen Mistletoe Kisses, which features Vinny and Cary Ann. She's the proverbial good girl and he's the bad boy everyone warned her about. This had a rom-com feel to it, with some steamy sexy times thrown into the mix. This was also the longest story among the three and I think it gave a fitting end to the collection as a whole. The only hiccup would be the use of the nickname "Cherry" in the last two shorts, but nothing overly major. ♥

Pre-order Kisses and Wishes on Amazon.