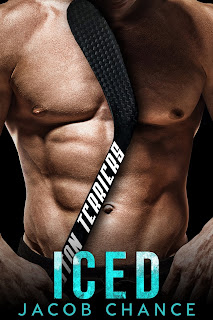 Jacob Chance is back with the second book in his Boston Terriers Hockey (side note: I had NO clue this was a spin-off of another series of the author's--Boston Terriers, which focuses on college football--so I've added those books to my to-be-read list now), and Iced was a fun read employing the fake relationship trope. After his years-long relationship ends after he catches his now-ex-girlfriend cheating on him, Oliver Ice has sworn to keep his head down and to focus on playing hockey and finishing up his fifth year in order to get his degree. He's also a bartender at an upscale club that features talented dancers, and his vow to not be distracted by any woman is suddenly put to the test when he notices the new dancer gracing the stage. Ava Madigan is gorgeous and was definitely meant to dance. Oliver is surprised to learn that she's a senior at Boston University, but what's taken him aback is her clear dislike for him. He has no idea that Ava's had a thing for him since she was a freshman, but when she needs a fake boyfriend by her side during a weekend-long family reunion that'll have her in the same space as her ex-boyfriend who just now happens to be her older sister's boyfriend, Oliver offers to step in. It could be the start of a beautiful friendship...or it could be the beginning of something far more, if only they'd allow themselves a chance.

There was a lot to like about this book--from the banter between the two main characters to seeing their relationship develop. Oliver turned out to be a far nicer guy than I expected, surprising me even more when he didn't react negatively to Ava's treatment of him after they had been introduced to each other. I liked Ava for the most part, but her reaction to Oliver's teasing in the beginning did seem to be overboard, especially since it seemed like she still had a crush on him but thought he could be just like his mean ex-girlfriend. So, it was okay to have a crush on a possibly not-so-nice guy, but you couldn't be friendly with him? Okay, weird... But when she wasn't being weird around him, Ava was actually a really sweet girl who didn't see how beautiful she was on the outside and never gave herself or her talent for dance as much credit as deserved. There were a couple of things that stopped me from giving this book a higher rating, namely, how there would be what I felt were less than smooth transitions in the story and how Ava's actions and reactions didn't always match her words and explanations later on. Otherwise, I did enjoy reading Iced quite a bit, and can't wait to read book three. Four stars. ♥

Read my reviews for the Boston Terriers Hockey series: