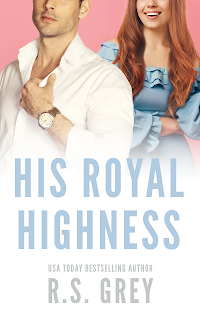 You know the song "Someday My Prince Will Come" sung by the first ever Disney princess, Snow White, in the classic animated film Snow White and the Seven Dwarfs back in 1937? It's remained a favorite among many who, like me, have a thing for animated movies and their soundtracks, but even if you aren't into listening to soundtracks but a lover of Disney flicks, the song should be a familiar one and for good reason. Countless people have hoped to find their prince or that their prince will find them and then they can ride off into the sunset and live happily ever after. And for those of us who are older, we may no longer read story books about princesses who find their princes, but that's what we have romance novels for, and in the case of R.S. Grey's newest standalone, it's all about a woman who plays a princess and the prince who makes his way back to her eight years after he left.

His Royal Highness introduces readers to twenty-six-year-old Whitney Atwood, a woman who has worked at the Fairytale Kingdom's flagship theme park in Georgia since she was fifteen. From selling balloons as a teenager to now playing the role of Princess Elena, Whitney has been a part of the Fairytale Kingdom family for over a decade. She beloved by the families who come to visit and is commended by those she works with, whether In Character or not, and gets along with almost everyone. When she's unexpectedly paired with thirty-six-year-old Derek Knightley, however, she doesn't welcome him with her usual sunny smile and friendly demeanor. Maybe it's because after a few months of a budding friendship as mentor and mentee, Derek upped and left, choosing to let her know he was headed for London via eMail. Now, he's back. So what if he happens to be the grandson of the park's owner and creator? So what if he's still as distracting as he was before? Her crush on him died years ago. She's moved on, but Derek seems determined to get his chance to be with Whitney and ensure that their story ends happily ever after.

This was such a fun read, and I thoroughly enjoyed getting to know both Whitney and Derek as they made their way towards their happy ending. Readers get a glimpse of their past and it's not your typical sort of romantic past either. Let's just say that they clearly had a connection eight years prior, but with the ten-year age difference and where they were at that particular point in their respective lives, and it was almost as if it was a case of wrong timing. Kudos to Whitney for not immediately falling back on her long-held feelings for Derek. I'm not saying that she made him work for a shot with her, but I think that being cautious isn't necessarily a bad thing. These two needed to figure out if they really wanted to pursue something romantic with each other and just how invested they would be. I also want to note that there were a number of side characters were standouts, but the one who takes top prize was none other than Cal Knightley, Derek's grandfather and someone Whitney was quite close to. Every time the man appeared in the book, he brought a smile to my face and made me think of my late maternal grandfather. A mostly lighthearted read, there was a bit of angst in the form of the side story concerning Whitney's family, but nothing overly heavy or depressing. His Royal Highness was a quintessential five-starred R.S. Grey story. ♥

Purchase His Royal Highness on Amazon.