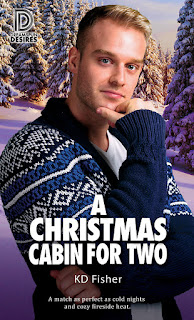 Ah, I love that Christmas and holiday stories are up and about, and KD Fisher's novella, A Christmas Cabin for Two, gives me all the feels with a sweet story about two men finding true love. Mikah Cerullo and Matt Haskell come from different backgrounds, the former living in New York and having worked as a teacher in Boston, and the latter living in Idaho as an organic farmer. When Mikah and his sister shows up at the Christmas tree farm Matt and his brother own, they form a tentative connection, one that grows stronger each and every time they're together. What future can these two have when Mikah is set to return to New York to interview for a coveted job after the holidays and Matt is staying right where he is? You never know... After all, there's a reason why they say Christmas is the most magical of seasons.

I adored KD Fisher's novella! It had this wonderful story about finding love and fighting for it and it had all the holiday feels without being overly sappy (not that being sappy is a bad thing!). I enjoyed seeing how Mikah and Matt made each other better people, with Matt showing Mikah how important it is to simply be and to have peace of mind and Mikah opening Matt's eyes to letting go and having fun. They balanced each other out in ways the previous people they were with were never able to. Their respective families were over-protective and nosy, but they were supportive and loving, which was such a refreshing change from the often-seen drama of unaccepting families of gay children. Sweet with a hint of sass and steam, A Christmas Cabin for Two turned out to be a five-starred Christmas read for me. ♥