Book Spotlight: That Time I...Survived My Teens by Craig Barker 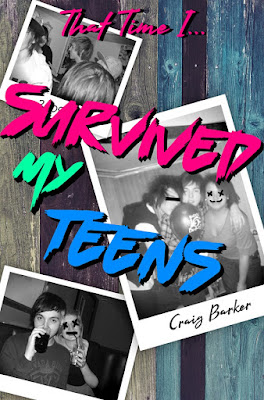 About That Time I...Survived My Teens
The Saturday prior to starting this memoir, my ex-fiancé and I had two of his work friends over for an old-fashioned games night. And when I say “old-fashioned,” I’m talking about dice, cards, racking up your points on an abacus, etc. You know, the things people entertained themselves with before politicians blamed every violent fart that wafted their way on video games.

Anyway, seeing as I didn’t know who these people were and would’ve much rather spent the evening on the sofa with our dog, I was less than optimistic. If anything, the whole ordeal was going to be like sitting through a Christopher Nolan movie. Sure, I’d say I was having a great time to fit in, but in all honesty, I wouldn’t have a clue what was happening and I’d probably need to take a nap midway through.

Hours before they arrived, just as I’d started to have those “what if I accidentally say something so obscenely offensive or mind-numbingly stupid, I’ll be haunted by the memory of it for years to come” thoughts, my ex ran down into the basement in which I dwell, his eyes frantic, and begged—
“Please don’t talk about choking on dicks when they get here.”

“Please, Craig. That kind of talk makes them uncomfortable. Don’t do it.”

I felt a flurry of emotions in the picosecond it took for his words to register: amused, bemused, offended. It sounded like a joke, but his face was full of fear—a fear that I would be unequivocally crude to these complete strangers, and that my behavior would burn bridges he obviously wanted to keep erect (more on erections later).

That was when it hit me like a pair of loose-hanging nuts to the taint; a realization that I, Craig Thomas Barker, had a pattern of behavior that stretched across my life since adolescence—
I’m the person you get warned about before meeting. I’m the person that gets warned before going anywhere.

Like Carrie Bradshaw, “I couldn’t help but wonder” why that was. So, in order to understand who I am today, I decided to take a look at the years that shaped me. I spread my life out on the table, lubed it with the flare of artistic exaggeration, and went at it until I found my answer.

This isn’t so much a memoir as it is a gay’s journey to discover himself; don’t expect structure, coherency, or a thoroughly thought out narrative with a climactic closing paragraph that gives any of this dribble closure. I’m no one special, I’m not famous, and I don’t have much to say that hasn’t been said before, but I have lived a life, and all twenty-six years of that life has culminated in a single sentence—
“Please don’t talk about choking on dicks when they get here.”

This memoir explains why…
And it was cheaper than therapy.

Add That Time I...Survived My Teens on Goodreads.

An Excerpt from That Time I...Survived My Teens
I’m a child of the nineties and a teen of the noughties. I grew up with Buffy the Vampire Slayer, Sex and the City, Power Rangers, and Batman: The Animated Series, and I think these four shows perfectly encapsulate everything I am, from my hobbies—comics, video games, writing, wishing I was a Slayer—to the boy beneath the layers of sarcasm, anxiety, and a thirst for men in spandex.

I am what my time made me.

I remember dial-up internet, talking on the landline with the cord wrapped around my finger after school, and the irrational fear of strangers in anonymous chat rooms. I remember opening up my Christmas presents and going crazy for the latest Megazords, and I remember how unhappy my parents were before their divorce…though, maybe that’s only something I can see in hindsight.

My point is, I remember my childhood with as much accuracy as one can when looking through rose-colored glasses of a simpler time. Only it wasn’t simple. In fact, from as young as the age of four or five, I was already struggling internally with something I wouldn’t understand for many years.

Rocky DeSantos is the name of the second Mighty Morphin’ Red Ranger, later to be the Blue Zeo Ranger before getting replaced by that brat Justin in Power Rangers Turbo, (I’m still bitter about it), and he was, without a doubt, my sexual awakening. He was a 90’s dreamboat who looked as if he’d been pried from a boyband, wearing a sleeveless red shirt and a glistening smile, and whenever he was on screen, I was captivated. 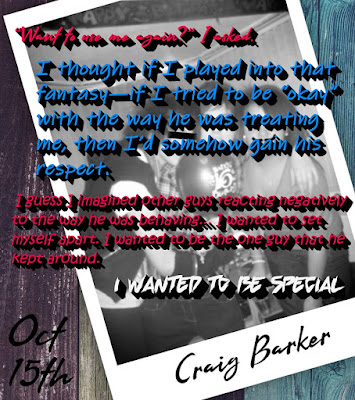 About Craig Barker
Writing a biography has always baffled me. I mean, I’m writing my own but I’m supposed to do it in third person, right? I’m supposed to tell you I attended some top-notch school, help people cross the street, have a “relatable” passion for something and spend my weekends frolicking in a field of flowers…

My name is Craig. I like fried food. I write because I enjoy it. Please don’t make me do this anymore.