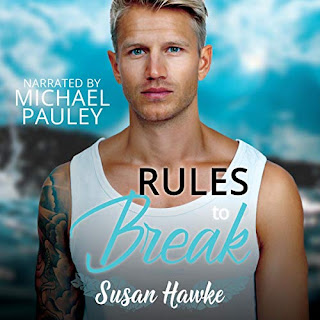 Don't you love it when a book surpasses any and all of your expectations? That's exactly what happened while and after listening to Rules to Break, the second book in Susan Hawke's Davey's Rules series. Those expectations of mine have remained consistently high, all thanks to my previous listening experiences with this current series and her previous one, Lovestrong, from Hawke. All of those audiobooks were narrated by none other than Michael Pauley, and dare I say that this latest audiobook is quite possibly one of his best ever, which is saying a lot considering he's one of the most in-demand romance narrators around.

Rules to Break is the story twenty-five-year-old Preston Wallace, a brat who lives a life of privilege, and thirty-five-year-old Bryan Miller, a Daddy who has no boy of his own, but when Bryan is challenged to make Preston the perfect boy any Daddy would want, they find themselves in each other's company for the next three months. They seem to have a knack for pushing each other's buttons and frustrations pile up, but there can also be no denying the scorching hot chemistry between them. The time they spend together brings them closer, but while Preston knows he wants nothing more than to have Bryan claim him as his boy, Bryan hasn't made his intentions, if any, known. By three months' end, will Preston have a Daddy and will it be Bryan?

Susan Hawke's managed to pen a story that's more than just about a particular sex kink, i.e. Daddy-boy. There's humor here, but there's also angst, especially from Preston's end, who isn't some good boy pretending to be a brat, but the guy has a good heart and is simply craving affection and approval from someone other than the three household staff members who have become more like family than his actual parents and the owners of Daddy's Lap. There were times both Preston and Bryan frustrated me with their stubbornness, but goodness, these two were so darn entertaining and, ultimately, endearing. Michael Pauley brought them both to life, and the range of emotions he showcased, particularly during one scene of Preston's at the seniors center, made me want to stand up and applaud the man. Hawke and Pauley have done it again with Rules to Break, and this one gets five-plus stars. ♥