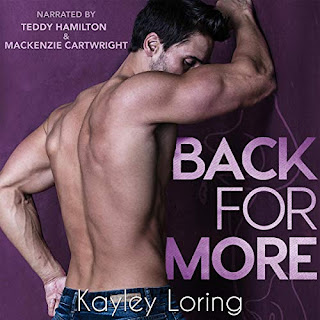 I'd never read nor listened to anything penned by Kayley Loring prior to her newest release, but if her back list is as fantastic as this one, then I'm clearly missing out. Narrated by Teddy Hamilton and Mackenzie Cartwright, Back for More is a standalone audiobook, and it's a romantic comedy with a touch of second-chance romance and enemies-to-lovers. We're introduced to twenty-three-year-old Lily Barnes, a woman who grew up wanting for almost nothing, except the love and affection of the mother she lost. When she decides to leave her home right after graduating from high school, it isn't merely because of wanting to pursue a career in acting. More than anything, what Lily craved was her widowed father's approval and recognition. However, it isn't just her father and the only home she's ever known she's left behind; Lily leaves Wes Carver, too, the son of their family gardener. Wes who came into her life when he was sixteen and she was fourteen. Wes who owned all her kisses. Wes who she only said goodbye to in a note telling him to not go looking for her. Five years later, Lily returns, ready to prove to her father she deserves to take over their family-owned realty business. It isn't until she's back in town that her father reveals the one piece of information that he failed to mention before: her new boss is none other than Wes Carver.

This rom-com was a revelation, and I enjoyed the heck out of every second of it. Kayley Loring perfectly balanced the romance with the comedy and sprinkled some slow-burn, second-chance, and enemies-to-lovers to it and the tension between the main characters was deliciously addictive. To be perfectly honest, I'm not usually a fan of heroines like Lily, but I'm glad that I didn't allow that initial impression dissuade me because there was more to Lily than meets the eye. She wasn't the spoiled princess I thought her to be, and while I did raise an eyebrow at her returning home to get her hands on her trust fund a year earlier than she was supposed to, at least she was honest about it. Then there's Wes, and the guy simply stole my heart, even as he struggled with keeping his cool and distance from Lily because he didn't want to get his heart broken all over again should she choose to leave once she received her trust fund. He was sweet and sensitive but he also had a dirty mouth on him. Teddy Hamilton and Mackenzie Cartwright brought these two to life impeccably well, and I think they were paired perfectly for this audiobook. I've listened to Hamilton before, so I'm not surprised by how gifted a narrator he is, but this was my first listen from Cartwright, and she left me just as impressed as I was with Loring's writing. All in all, Back for More was one of my top rom-com audios this year, and I wouldn't say "no" to listening to more from this trio. Five stars! ♥

Purchase Back for More on Audible | iTunes.