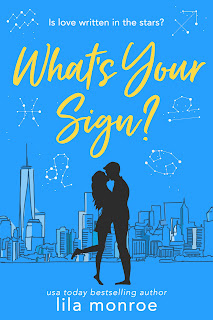 Lila Monroe is back with the second novel in her Cupids series, and it's a romantic comedy story about a woman adamant on saving the beloved newspaper she works at and the man who turns out to be her new boss and the greatest threat to the survival of The Gazette. Twenty-six-year-old Natalie Martinelli isn't the sort of person who easily believes in  things like superstitions and star signs, but when the guy she made out with while stuck in the elevator turns out to be the guy who holds the fate of The Gazette in his hands, she's prepared to do whatever's necessary in order to ensure that she and the people she works with get to keep their jobs. Taking note that thirty-year-old Justin Rockford is an avid fan of the newspaper's astrology column, Natalie decides to steps in for Madame LeFarge, the resident "mystic" and columnist who's taken a break. What harm could there be nudging Justin in the direction that will save The Gazette? As the weeks pass and Natalie and Justin become more romantically entangled, will the relationship and the newspaper survive the aftermath of Justin learning the truth?

This was every bit as fun a read as the first Cupids novel, Cupids Anonymous, though both books can be read as standalones, so you don't necessarily need to read them in order. I liked the chemistry between Natalie and Justin, making the romance part of the story one that brought a smile to my face, but it was the comedic aspect that was a winner for me. Natalie choosing to come up with horoscopes that were meant to sway Justin's decision making process was hilarious, and while it's easy to see that it is rather sneaky and manipulative--and a wee bit self-serving--on her part, this is a rom-com read after all, so any righteous indignation would be misplaced on my end. There aren't a whole lot of surprises in terms of the direction the story takes or how everything is resolved, but it was still an enjoyable read that turned out to be a good way to start off the week. What's Your Sign? gets 4.5 stars. ♥

Read my reviews for the Cupids series: