Review: I Knead You Tonight by Teagan Hunter (Slice #2) 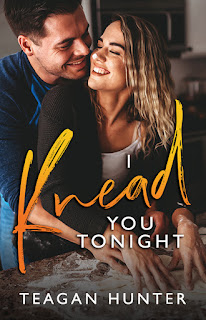 I've been eagerly awaiting the second novel in the Slice series ever since I finished the first one, A Pizza My Heart, and Teagan Hunter rewarded my barely there patience--yeah, I'm not known for this particular nearly non-existence virtue of mine--with an enemies-to-lovers story worth its weigh in pizza dough. Fact: Drew Woods hates Winston Daniels. Fact: Winston Daniels hates Drew Woods. Fun Fact: Drew and Winston engaging in hate sex is a bad idea but feels too good for either of them to really care. Yep, sex between these two is like a really delish pizza pie--one slice is never enough. And that may have sounded dirtier than I had originally expected it to be. Oh, well...

Winston and Drew have known each other for a few years all thanks to Winston being the twin brother of Drew's best friend. They've hate a love-to-hate relationship for nearly the entire time as well, so when Winston insists that Drew and her three-month-old son, Riker, stay with him when he finds out that she can't use her car without it being repaired and that her apartment has zero heating, Drew doesn't quite understand why. Sharing the same space could breed further disharmony between them, but it could also force them to realize several things: one, they're wildly attracted to one another; two, the sex between them is the best ever; and three, if they give what's happening a real chance, they may finally realize that maybe, just maybe, they don't hate each other all that much.

Oh, my dear Winston! Sigh. The guy proved such a damn revelation. There was no denying how curious the guy had me in the series starter, and getting to know him better showed me that there was far more than I ever thought possible. He was more than the lazy, irresponsible stoner dude he initially seemed to be. I loved how each layer was peeled away as the story progressed, and the more that was revealed, the more I loved Winston. Admittedly, Drew was someone I had a love-hate thing with. She had firm opinions about him and they weren't exactly of the glowing variety, plus it felt as if there was this whole back and forth going on with her thoughts and feelings as far as he was concerned. She did, however, manage to win me over and I loved how she also evolved in the book. It was great having Wren and Foster around, and Simon was awesome as always. I don't care who between Porter and Sully get their book next for as long as they both get a book! 4.5 stars for I Knead You Tonight. ♥

A Pizza My Heart (book one) - five-plus stars - My Review

Purchase I Knead You Tonight on Amazon.