Review: Kiss Me Tonight by Maria Luis (Put a Ring on It #2) 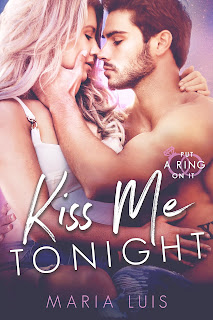 This series is seriously addictive, thanks to the fabulous writing chops of Maria Luis. She clearly does romantic comedy well, as evidenced by the Put a Ring on It series starter, Hold Me Today, and now with the second novel, Kiss Me Tonight. If you've read book one, then thirty-five-year-old retired football player and two-time Super Bowl winner Dominic DaSilva should be more than familiar to you. He may not have found love on a dating reality show, but he sure ended up losing far more than he bargained for. When he's offered a coaching position at a high school, he takes it and finds himself in London, Maine, and if being in the middle of nowhere wasn't bad enough, the fact that he's only the assistant coach makes things worse. Oh, and the head coach? Well, she's a thirty-seven-year-old single mother named Aspen Levi and their first meeting doesn't have them hitting off, unless you count wanting to hit one another a win. Aspen and her fifteen-year-old son, Topher, also happen to be his new neighbors. Fun times. Then Aspen and Dom share one kiss, a kiss that leaves them wanting more. Things just got interesting.

Dom and Aspen totally made what was really crappy day sooooo much better! I was lamenting the woes of my car troubles while I was waiting for it to be fixed when I decided to spend the time reading so I would quit whining. These two had me trying--and failing--to stifle my laughter as I read their story. I loved the back and forth because I had a feeling that once these two got a taste of far less hostile stuff, it would be absolutely epic...and I was right! Dom and Aspen had chemistry and it was the type that sizzled from the get-go. These two were on equal footing and I like that sort of thing because there isn't the usual knight-in-shining-armor-rescuing-the-damsel-in-distress sort of scenario. They had rather heartrending back stories, especially on Dom's end, and I liked getting to see the more vulnerable side to these two. This was very much an enemies-to-lovers romance, which also happens to be one of my favorite tropes, and when done really well, that snap, crackle, and pop remains even after they've gone from one end to the other. And believe you me, Maria Luis did that extremely well. Five stars go to Kiss Me Tonight. ♥

Read my reviews for the Put a Ring on It series:

Hold Me Today (book one) - five stars - My Review

Purchase Kiss Me Tonight on Amazon.