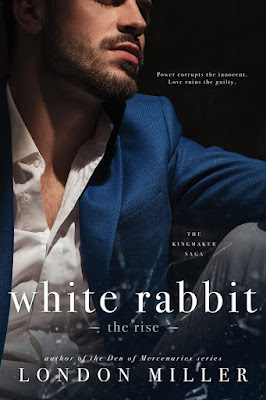 About White Rabbit: The Rise
As an investigative journalist, Karina Ashworth’s job involves delving into New York’s black market of criminals and mischief where sin is almost too tempting to ignore.

When she crosses paths with a man whose smile is a little too cunning—and his power a little too vast—she learns very quickly that dancing with the devil is far more enjoyable than she had ever imagined.

But Uilleam Runehart is not at all what he seems, and as a notorious fixer with a thirst for power, he’ll do anything to obtain his title.

How much would you pay to be a king?

From Romantic Suspense author London Miller comes the first book in a sexy, thrilling new series following a man with too much power and the only woman that can bring him to his knees.

Read my five-starred review of White Rabbit: The Rise.

Find the Kingmaker series on Goodreads.

About London Miller
London Miller is the author of the Volkov Bratva series, as well as the Den of Mercenaries series. After graduating college, she turned pen to paper, creating riveting fictional worlds where the bad guys are sometimes the good guys.

Currently residing in Atlanta, Georgia with her husband and two puppies, she spends her nights drinking far too much Mountain Dew while writing.