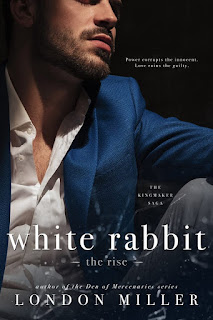 It's been a while since I've read London Miller's writing, which is rather depressing since this author sure as heck knows how to write a romantic suspense read like a boss (does anyone actually still say that?). If you're familiar with her previous work, you'll notice that quite a number of them are tied together in one way or another. In the case of her new Kingmaker series, it showcases the story of the eponymous Kingmaker and Belladonna--aka Uilleam Runehart and Karina Ashworth, respectively. Here, though, Uilleam is yet to be king and Karina his would-be queen, and their story is one fraught with intrigue and intensity and a hell of a lot of delicious tension between two awesome main characters making for the sort of read that will have you addicted till the series's end.

If you're a fan of slow-burn romances, White Rabbit: The Rise is right up your alley. Add to that elements of suspense and drama, and you've got yourself a fabulous start to a new series. While Uilleam and Karina are characters featured in the author's previous releases, you can still jump into this series starter without having read her other stuff (but please do yourselves a favor and read her earlier series--I promise, you won't regret doing so!). Karina is no pushover and she's no sniveling female constantly on the lookout for some member of the male species to come save the day. Uilleam is a man on a mission--and that's to take his rightful place--but when Karina crosses his path, life as he knows it changes and the shift proves to be one that neither of them ever prepared for.

I know how capable of a writer London Miller is and she definitely does NOT disappoint with this novel. Yes, there's a bit of frustration because this does end in a cliffhanger, though for the record, the sequel, White Rabbit: The Fall, is already out in the market and the third book in the series is due for release in less than two weeks' time. Now, while you don't necessarily need to read Miller's past series, you will need to read the Kingmaker saga in order. I know there are readers who prefer waiting till an entire series is done before diving in, but based on experience, this author makes the wait worthwhile--and that's coming from someone who doesn't really have a lot of patience to begin with! Come and fall into the rabbit hole with the rest of us. I'm giving five stars to White Rabbit: The Rise. ♥