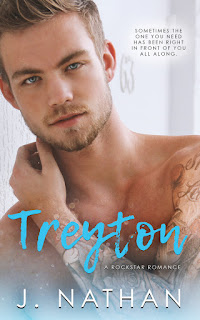 My nose scrunched. “What?”

“You're heart. If I've stolen it, I'm not giving it back. It's mine and I'm keeping it forever.”

I tilted my head. The vulnerability emanating from his eyes nearly brought me to my knees. “Good. Because I don't want it back.”


After reading Kozart last year, I knew two things to be true: that book was just the beginning of a new series and whatever followed next was going to be one of my most anticipated reads. Now here we are, almost seven months later, and J. Nathan has made the wait worthwhile with the release of Treyton. This second novel in the author's Savage Beasts series is every bit as enticing and endearing as the series starter, with the spotlight now on Savage Beasts's drummer, twenty-five-year-old Treyton Collins, and their publicist, twenty-seven-year-old Brielle Patrick. After what she did to try and sabotage the band's lead singer's relationship with his girlfriend, Brie isn't exactly anyone's favorite person at the moment. Which is why she finds it strange that Trey seems to have set his sights on her, telling her that he'd like to get to know who the real Brie is behind the bitchy and bossy publicist persona. What surprises Brie more, though, is Trey sharing his past with her, and she begins to see that there's more to him than being Savage Beasts's resident bad boy. Something's missing in Brie's life. Maybe it's the not-so-little drummer boy who she's now seeing in clearer light, but are they ready to entrust their hearts with the each other?

Ah, but how J. Nathan knows the way to my romance reading heart. Le sigh. Enemies-to-lovers is my romance trope jam, and Nathan has the unique ability to bring all the necessary elements together without overdoing it or skimping on anything. Her writing has always been superbly above par, and I happily and eagerly devour anything she has to offer because she makes the time I spend getting to know her characters and the story they have to tell worth it. Admittedly, I was NOT a fan of Brie's in the first book, Kozart, not with her machinations to split up Z and Aubrey. However, she's more than redeemed herself in this second book because her back story gave me a far better understanding of her. Similarly, Trey was a revelation and once I found out what his personal history was, I seriously wanted to give the guy a hug. I loved the way their relationship evolved and how everything played out, especially when it came to the conflict between the two of them because it felt real and honest rather than overly idealistic and simple. There's a reason why this author is one of my go-tos and I know I made the right decision adding her to that list every time I read whatever her latest book is. Five-plus stars for Treyton. Book three, please! ♥

Read my reviews for the Savage Beasts series: