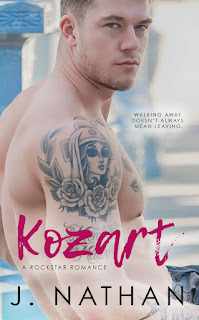 “You have my heart, Aubrey. And I don't want it back.”

I already how well J. Nathan can write new adult (NA) sports romances, but when I found out that she had a rock star romance up for her next release? Well, let's just say I was happily surprised and eagerly desperate to get my greedy hands on it so that I could simply read another J. Nathan-penned romance. And well, will you look at that! This author has proven that she can move out of her comfort zone and venture into a whole new trope and do it fabulously well she did! This is a standalone read, so if you've never read anything by this author (what?!), then this is as good a novel as any on her back list for you to be introduced to Nathan's writing. Warning: it's addictive!

Kozart is the story of a rock star named Kozart Savage--better known to the rest of the world as Z Savage, lead singer of and songwriter for the hard rock band Savage Beasts--and a college senior named Aubrey Prescott. At twenty-five, Kozart has achieved the sort of success that aspiring musicians would probably sell their souls for. He's grateful for everything he's gotten, but he's also grown tired of certain aspects of his life as a rock star. So, when he meets a drunken twenty-one-year-old in a bridesmaid's gown, her having no clue who he is has him curious, but it's when they share a bed together without anything sexual happening but with him getting far more sleep than the norm for him that astounds Kozart. He knows he can't make Aubrey any promises, but she makes him want to.

In all my years of reading, I've had my fair share of rock star romances land on both my actual and virtual bookshelves, so a number of the story lines sound like familiar refrains with maybe the tempo or beat changed up. J. Nathan, however, has added her own creative nuances to her story that makes it feel quite refreshing a read for me. Aubrey and Kozart don't seem to have a whole lot in common; she's a little bit country (music) and he's a whole lot of rock (music), but they roll with it. (Get it?! Moving on...) These two were heavy on the flirting and banter, but they were in short supply when it come to trust. Weirdly enough, you'd think that the fact that he was a rock star and she was a regular person would have been complicated enough, but they just seemed to fit so well that their interactions were really easygoing. Life, however, and what's expected of them is what causes the issues.

When a go-to author of mine steps out of the proverbial box to pursue something different from their norm, I'm just happy to be along for the ride. Can a romance author take on a new sub-genre and not do as well? Absolutely, but that wasn't the case with J. Nathan. I absolutely loved everything about Aubrey and Kozart's love story. There was some wit and humor matched nicely with the sex and romance. There was angst but nothing overly dark or heavy, and I was totally charmed by Nathan's writing and the story itself. Kozart all too easily snags five-plus stars. ♥