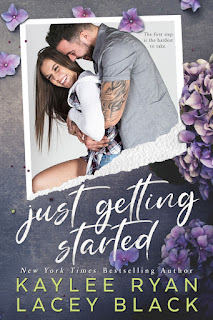 Just Getting Started is the second novel in the Fair Lakes series penned by authors Kaylee Ryan and Lacey Black, and I'm happy to say that I liked this one better than I did the first book, It's Not Over. Gabrielle Connor is the younger sister of Gwendolyn Drake while Chase Callahan is the best friend of Harrison Drake (FYI: Gwen and Harrison's story is told in the series starter). Gabby works in one of the gyms owned by her brother-in-law and Chase is both the manager and one of the trainers there. When Gabby's struggle with finding a new place to move to comes to light, Chase offers up a guest room in his home. She's hesitant, thinking that she would have to contend with all the women that Chase would be taking home with him. However, Gabby has no clue that Chase has only had one woman on his mind for years--her. He's been biding his time, knowing that she wasn't ready for any sort of declarations from him, but with them now living under one roof, Chase intends to prove to Gabby that being together is a risk worth taking. When a surprise ends up on his doorstep, will Gabby regret risking her heart?

This was a pretty good read, one that kinda-sorta-maybe had a frenemies vibe to it, with frenemies were secretly lusting after each other. Gabby and Chase already had that underlying thrum of attraction going on between them in the first book, which was what had me curious to see how it would all play out in this second one. The story is paced well and while I wasn't a fan of Gabby's assumptions of Chase in the first few chapters, I'm just glad that was resolved far more quickly and drama-free than I'd expected. The conflict wasn't that much of a surprise, however, I do like the fact that it ties in to the next book in the series, and may I say that I'm quite excited to see how everything there plays out because I am mighty curious about who the book is about and who they may end up being paired with. But back to Gabby and Chase! I liked these two and they had the sort of romance where the feelings felt organic. Neither one was perfect and they did have their hang-ups, but once they were together as a couple, they realized that they truly were stronger united than apart. I'm awarding Just Getting Started four stars. ♥

Read my reviews for the Fair Lakes series: