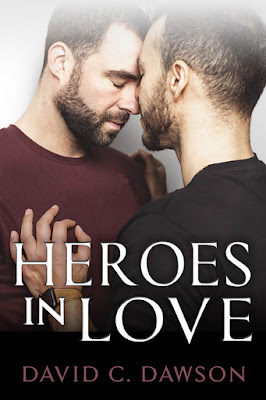 About Heroes in Love
Not every hero wears a uniform.

Can love last a lifetime?

Billy Walsh and Daniel Richards never intended to be matchmakers.

After all, they're only at the start of their own love story.

When Billy uncovers a failed love affair, he learns it lasted more than fifty years until it fell apart.

He and Daniel see their own fledgling relationship through the lens of the now estranged couple, and they vow to reunite the elderly lovers.

But as they set about their task, the pressure of modern life threatens to tear them apart.

Read my 3.5-starred review of Heroes in Love.

Add Heroes in Love on Goodreads.

An Excerpt from Heroes in Love
Daniel’s kitchen was filled with a jumble of antiquated cooking gadgets accumulated from different eras in the social history of domesticity. An ancient, blackened stove stood in the chimney alcove. Next to it, an oversized American retro blender perched precariously on a mottled red Formica work surface, alongside a vintage 1930s toaster. A Victorian clothes dryer hung from the high ceiling above an antique pine table. The walls were cluttered with framed pictures, mostly collections of actors smiling from bygone West End productions. Every surface seemed cluttered with either elaborate culinary equipment or music manuscripts.

Billy looked around him in awe. The house was narrow, but extended a long way back. There seemed to be so much space. “Can I ask a cheeky question?”

“You mean, how can I afford this?” replied Daniel. “I know. I’m very lucky. My grandfather left it for me when he died. This was where I ran to when I left my parents and came to London. Grandpa Bob was the world to me. He was my mum’s father, and the dad I never had.”

“It must be worth a fortune now.”

“Three bedroom terrace house in desirable Battersea?” Daniel turned to the worktop, and opened a cupboard in front of him. “I suppose it is. But it means more to me that this was Grandpa Bob’s home. Lots of the things I have here were actually his.”

He turned back to Billy.

“I said coffee, but would you prefer tea?”

Daniel crossed to the stove, picked up a large whistling kettle, and carried it to the sink.

“Have you got mint tea?” asked Billy.

“Ooh, there’s fancy,” replied Daniel as he filled the kettle. “Give me a second and I’ll gather some leaves from the garden. Peppermint or spearmint?”

Daniel set the kettle down on the stove and lit the gas. He picked up a pair of scissors from the dresser, crossed to the backdoor, and undid two heavy bolts.

“Come and have a look at the outside space Maggie created for me,” he said.

Daniel swung open the door. Billy could see a hazy glow of twinkling lights beckon him into the mysterious space beyond the threshold. Leading away from the kitchen door he saw an avenue of sculpted shrubs, each festooned with tiny lanterns. The pathway seemed to be endless, disappearing into the far distance. On either side of the doorway were two Victorian lampposts. A flickering yellow light illuminated huge glass globes on top of the wrought iron posts.

Billy stepped across the threshold into the garden. The ground felt soft beneath his feet. He squatted down and gently brushed the palm of his hand over its mossy surface. His nostrils were filled with the scent of chamomile. Billy looked back over his shoulder. Daniel stood smiling in the doorway.

“This is how I keep sane in this city of madness.”

Billy stood and walked farther into the garden. After a few yards he came across a break in the avenue of shrubs. It revealed a small, half-walled patio lit by two more wrought iron lanterns. They spilled yellow flickering light onto two chairs and a neat, glass-topped table. Suspended on the walls around the patio were earthenware pots in which grew many different types of herbs.

Daniel appeared at Billy’s side with the scissors in his hand.

Billy felt as if he had been transported into a film set. Every one of his five senses was overwhelmed by the magic of Daniel’s west London wonderland.

“It’s beautiful,” said Billy. “It’s so - tranquil. Surely this must have cost a fortune to build?”

Daniel bent down to the chamomile lawn.

He walked across to the wall of herbs, and harvested a handful of mint leaves.

“I haven’t switched on the mist,” said Daniel. “The pump needs some fixing. If I did, the romance here would’ve been overpowering.”

Billy turned as Daniel stopped behind him. He held a handful of mint leaves to Billy’s nose, and Billy inhaled deeply.
“Peppermint,” said Daniel. “I hope I made the right choice.”

He lowered his arm, hooked it around Billy’s waist, and pulled him closer. He leaned forward and kissed Billy slowly on the mouth. Daniel’s lips parted as he said quietly:

He dropped his arm from Billy’s waist, reached into his front pocket, and pulled out the scissors.

“I wasn’t planning on giving myself a circumcision tonight.”

Daniel let the scissors and the handful of mint fall to the ground. He wrapped his arms around Billy, and pulled him close. Suddenly they were kissing, wildly, passionately. Daniel placed his hand on the back of Billy’s neck, holding the two men close as their tongues hungrily explored each other’s mouths. He wrapped his arm tight around Billy’s waist, and slipped his hand down to push their groins closer together.

But Daniel was different. One moment he was kissing Billy with a passionate urgency. His raw aggression filled Billy with a sense of sexual danger. The next moment Daniel was gently sliding his tongue across Billy’s stubble, or tenderly kissing him on his forehead, on his eyes, or his nose.

Finally, Daniel slipped his hands onto Billy’s shoulders, and the two men stood with their foreheads touching. Their eyes locked on each other in an unblinking gaze.

“Do you still want that mint tea?”

“Maybe I’ll have a coffee after all,” said Billy. “I’d like to stay awake tonight.” 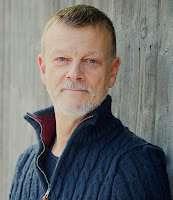 David C. Dawson writes contemporary thrillers featuring gay men in love. He’s an award-winning author, journalist and documentary maker. His debut novel, The Necessary Deaths, won Bronze for Best Mystery & Suspense in the FAPA awards. The second in the series is The Deadly Lies. His third book, For the Love of Luke, came out in October 2018.

David lives in London, with his boyfriend and two cats. In his spare time, he tours Europe and sings with the London Gay Men’s Chorus.