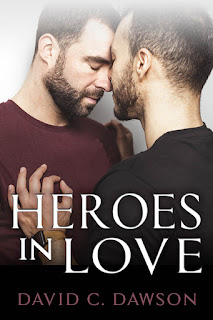 David C. Dawson is a new-to-me author no longer, all thanks to his latest release, Heroes in Love. Just when Billy Walsh thought his acting career was on an upswing, life swung him a blow that had him taking on the responsibility of caring for his ailing mother. He takes a job as a social care planner, which may not be his life's dream but it's an occupation that he acknowledges he can do quite a bit of good in. While at the hospital, Billy's path crosses with that of Daniel Richards, a freelance singing coach. The two have an immediate connection, and it's a connection that's not only promising but one that they are both committed to. At the same time, Billy meets an elderly gentleman named Charles Stuart, and he learns about Chuck's own love story that did not have the best of endings, even after the years he was with the love of his life. Maybe Billy and Daniel can help Chuck reconnect with Guy Frobisher, but could their good intentions bring forth more trouble, not just for the older erstwhile couple but for the fledgling couple that is Billy and Daniel. Could each of them figure out how to be heroes in their love story?

This was a promising read, one that had a rather enticing blurb that had me quite eager to read about not just one but two couples--one discovering their love for the first time and the other finding their way back to each other with some matchmaking assistance from the younger couple. This was, for all intents and purposes, a very angsty read, and with me being the angst addict that I am certainly isn't complaining about the amount of angst because it never felt like it was far more than necessary. What the book lacks, however, is some honest-to-goodness chemistry between the main characters as well as a heap more oomph than could be found on the pages. Billy and Daniel were likable guys, but as a couple, I wasn't as emotionally invested in their story as I would have wanted to be. I would have also liked maybe a bit more delving into the whole Chuck and Guy angle because that was like such an enticement in the blurb. Alas, that fell a tad short as well. I did, however, appreciate David C. Dawson's writing, and the cast of characters was very notable as a whole. All things considered, Heroes in Love gets 3.5 stars. ♥