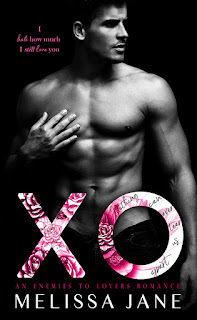 Melissa Jane is a new-to-me author, and her enemies-to-lovers standalone romance was a rather notable first impression as far as I was concerned. XO is the story of Rosie Reign and Jacob Lynch, who have known each other as children but were never really friends. As teenagers, Rosie became the target of Jacob's bullying ways, but when they're forced to work together for school, it becomes an unexpected opportunity for them to be in each other's company without the pressure of football, school, and family. But even as Rosie and Jacob inevitably fall in love and they make promises and plans, happily-ever-after is nowhere to be found once Jacob disappears without a word of explanation or goodbye. To make matters worse, he leaves Rosie just when she needs him most. Love turns to hate and kisses that used to warm her heart have turned into curses hurled at her memories of the first boy she had ever loved. Years go by, and the last thing Rosie ever expects is to come face to face with Jacob once again; but that's exactly what happens in the unlikeliest of places and with Rosie left with no choice but to see him.

Told in two parts, there was a lot about this book that I certainly didn't see coming--in a good way!--and that's always something I give kudos to because I love it when an author surprises me. The prologue sets things up quite nicely, leaving me curious as to what could have happened between Rosie and Jacob to have caused such animosity and hurt on Rosie's end. I don't want to spoil the book for anyone who has yet to read it. After all, there's a reason why anticipation is supposed to be a positive thing. What I will say is that going into this book, I had certain ideas as to where the story would probably go, and well, some of those ideas were a go, but a whole lot of what happens took me by surprise. Rosie and Jacob gave me all the feels, and I'm not just talking about that giddy feeling of seeing how first love unfolded and then that heartbreak when everything fell apart. There was frustration and anxiety on my end, and when everything was finally revealed, I just sat in my reading chair gobbling every detail up. Melissa Jane has definitely captured my attention, and I've now got my eye on her. 4.5 stars for XO. ♥