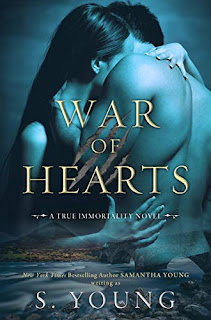 Written by bestselling author Samantha Young under the pen name of "S. Young", War of Hearts is a paranormal romance and the first in the True Immortality series. This is the story of Thea Quinn, a woman on the run from a man who seeks only to use her and abuse the powers that she's possessed all her life--powers that make her feel like an anomaly, not knowing what she is and who she's meant to be. She tries to stay one step ahead, but when a werewolf shifter is sent to track her, Thea's journey to freedom becomes even more perilous. After all, Conall MacLennan is not only the Alpha among his clan--which also happens to be lone werewolf pack in all of Scotland--his tracking abilities are renowned, which is exactly why he's the one that's been approached to go after Thea. The fact that Conall's sister is dying of lycanthropic disease is what tips the scales, making him agree to hunt down Thea in exchange for a cure for his sister. But when Conall's and Thea's paths finally cross and revelations come to light, will they become allies in a common fight or will betrayal, and now, heartbreak, remain their inevitable outcome?

I love it when an author tries something new and it turns out to be amazing and readers like me are the ones to reap the rewards! Samantha Young dove into the paranormal romance genre and based on this series starter alone, she appears to be doing swimmingly well. She's added her own creative spin to the werewolf shifter trope and has written the sort of read that's as entertaining as it is intriguing. I thoroughly enjoyed Conall and Thea's story, but I'm also curious as to what more awaits readers in this paranormal world that Young has crafted, which is exactly how a well-written opening salvo in a new series should be. Young allowed her main characters to take their time, laying a foundation with rich back stories that guarantee Conall and Thea clashing and having immediate mistrust, so that we see them struggling to make sense of what they assume to be true and the reality that's before them once they're together. While this may be a slow burn, it is far from boring, and Young has certainly set the bar high for herself with as far as this new series is concerned. I'm giving War of Hearts five stars. ♥