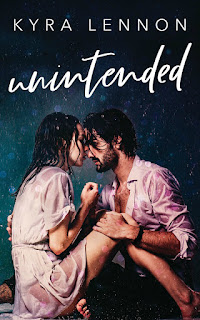 I love discovering new authors and seeing if their writing clicks with what I look for in the books I read. Kyra Lennon is my latest find, and her newest novel was like finding a gem when you least expect it. Unintended is the unique love story of two people who are at a crossroads in their lives, neither one knowing how to move forward, almost as if stuck in neutral without a map or a clue as to where they should go next. That is, until their paths criss-cross...

At twenty-three, Ashley McKay looks to be a man who is young and in love and with so much to look forward to. However, all people see is what Ash allows them to see, unable to share the sad truth about his situation. Who would believe him if he told them that he was a victim of domestic abuse at the hands of his own girlfriend? He knows that the right thing to do would be to walk away, but that's easier said than done. But then Ash meets Evie.

At twenty-nine, Evangeline West looks to be a woman of the world, someone who was conquering any and all challenges she came across. However, what people didn't see are the emotional scars that she carries deep within her. It's been two years since her marriage ended in divorce, yet Evie continues to struggle to truly move on from the shambles of her life from before. She's close to be thirty but is unfulfilled in many ways. Then Ash comes along.

This isn't your typical romance. Yes, there's that bit of an age difference between the main characters that is intriguing, but there's so much more to Evie and Ash's story than that. There are triggers, particularly when it comes to abuse from a partner, so tread carefully if this is something that is a no-go. The abuse is handled in a honest manner, without any sugarcoating but not in such a brutal way so as to only elicit a reader's shock and awe.

Kyra Lennon exceeded my expectations and did so in a way that didn't feel like she was trying excessively hard. She broke my heart with this story, but she also stitched it back together. I loved that Evie and Ash's tale was both heartrending and hopeful, reminding us that even at most broken, the time for healing will come and that the truest kind of love may not be perfect for everyone, but it will be perfect for you. Le sigh. Five stars for Unintended. ♥