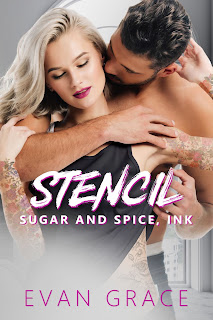 Stencil is the second novel in the Sugar and Spice, Ink series from Evan Grace, and it can pretty much be read as a standalone, although personally, I'd recommend that the books be read in order because there are a lot of recurring characters, what with the series being about siblings who find love and their respective happily-ever-afters. Book two features a woman who finds out she's pregnant but while the guy she's been sleeping with is supportive, obstacles in the form of family members who think she's a gold digger and women who don't care whether the father of her baby is single or not. She's Sierra Collins, tattoo artist and co-owner of Sugar and Spice, Ink, and he's Nicholas Echols, chef and restaurateur. Theirs started out as nothing more than a no strings attached arrangement. It was nothing more than sex, with their mutual lust for each other leading the way. But over the next few months, Nick has made it clear that he would like nothing more than to lay claim on their relationship, something Sierra shied away from time and again. With the pregnancy, will everything change for now or forever?

There were a number of things about this second in a series that I quite liked. The main characters had a fair amount of chemistry between them, and I liked that Sierra was a woman who didn't kowtow to others around her but didn't feel the need to be bitchy either, choosing instead to act in a more mature manner most of the time. Nick was also a pretty good guy who admitted when he had missteps and making up for them when need be. The family dynamic among the Collins siblings was also something that I liked seeing, making it clear that they were all quite close and protective of one another. Where the book faltered for me, though, was its repetitiveness at certain points, mentions of things that seemed to irk Sierra about Nick's behavior but not bringing it up, and and Nick's handling of their last blowout before they got to their happy ending. I wish I could explain in further detail what exactly had me less than satisfied with the last two, but I'm trying to keep this review spoiler-free. All in all, I did appreciate seeing just how Sierra and Nick's relationship had developed from hook-ups to more and the tidbits regarding the next couple in the series has me looking forward to its upcoming release. I'm giving Stencil 3.5 stars. ♥