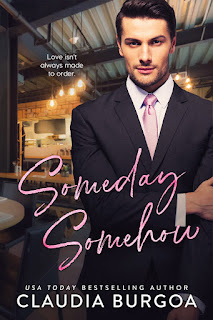 Someday, Somehow is the newest standalone from bestselling author Claudia Burgoa. It's a friends-to-lovers romance that also happens to be a slow-burn read. Agustin Diego Beltran and Georgia Angelina Jones first meeting may have been somewhat of a disaster; the second one isn't all that great either, but it does spark the beginning of a fabulous friendship between the two, leading them to become the Auggie and George besties that they are today. They support and inspire each other to follow their dreams, which is why Auggie backs George's decision to fly to Italy to find herself. It's while she's away that Auggie finally realizes one important fact that's eluded him for years: he's in love with his best friend. He just needs to figure out a way to let her know when returns after finding herself--only it's a man named Mario whom she introduces as her boyfriend. Soon enough, it turns out that he isn't any ordinary boyfriend either because George and Mario are engaged! Now, Auggie only has a limited amount of time to convince George that they're meant to be so much more than friends, but could it be too little, too late?

Whenever Claudia Burgoa has a new book, reading it is a no-brainer for me. Her stories are always easy to read, with humor and angst and a whole lot of romance. Auggie and George's story was every bit as slow burn as I expected it to be, and that was due in large part to it covering the twelve years of their friendship. It was easy to like Auggie and George, two people who were obviously very right for each other and who were meant to be more than friends, if only they'd get their acts together and see what's been right in front of them all along. The friends-to-lovers trope is a favorite of mine because I like seeing how the relationship between two people evolves from platonic to romantic and then into more--to see what stays the same and what changes. There was a lot of history between these two best friends; then there was the added complication of Mario. I enjoyed reading this latest standalone from Burgoa, but I confess that it wasn't necessarily my favorite from her. When I say it's a slow burner, I mean it was SLOW, far slower than I'd personally prefer, but still a good read. Four stars go to Someday, Somehow. ♥