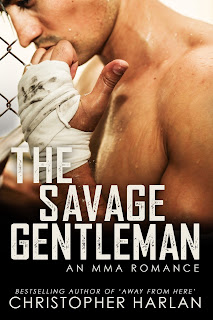 The Savage Gentleman is my first read from Christopher Harlan, and it was a pretty good introduction the author's writing. I wasn't entirely sure if it was a series starter at the onset--although I have confirmed via Amazon that it is the first in a new series--but it did feel like one, with a number of supporting characters who do spark an inkling of interest, making their presence known, thanks to their connection to the main characters. This series starter story of Lucas "The Ghost" Esparza, a twenty-five-year-old up and coming mixed martial arts fighter with dreams of making it to the big leagues, aka the Ultimate Fighting Championship (UFC). When the fight that was supposed to finally open the door for him to do exactly that is unexpectedly shut, no thanks to a shocking knockout loss, Lucas remains haunted by what went wrong even after a year since it happened. While he's yet to fully commit to training for a new match, he's tasked by his trainer to take on a couple of private sessions, one being with a woman named Mila (whose last name I don't recall being mentioned) and her entry into his world changes both their lives.

The blurb for this book hooked me in and there were certainly elements of it that I liked and appreciated. There was Mila being a survivor but one who still needed to regain firmer footing in her life. She was oftentimes sassy and without fear of expressing herself. Then there was Lucas's philosophy regarding the sport of MMA and what training and the like entailed. The idea of these two crossing paths and that being a turning point in their respective lives was what really had me curious and intrigued. The thing is, I had difficult connecting with Mila and it felt as if we only got to skim the surface of what makes her and Lucas really tick as individuals, and without delving deeper, I couldn't fully become emotionally invested in these two and their happily-ever-after. There were also continuity issues, i.e. Matt being old school and then not really and then back to being old school later on, Sophie wanting to meet guys again but then later it turns out she has a "great guy", etc. There was, however, enough for me to still enjoy the book, and I remain curious about this series. 3.5 stars go to The Savage Gentleman. ♥

Purchase The Savage Gentleman on Amazon.