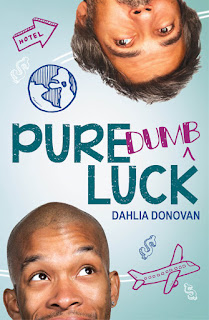 Note: An advanced reader copy (ARC) was provided by Hot Tree Publishing via Other Worlds Ink.

Pure Dumb Luck is Dahlia Donovan's newest offering, and it's a friends-to-lovers story about two best friends whose lives are changed the instant one of them finally wins the Mega Millions jackpot of eighty million dollars. Thirtysomethings Linwood Robinson and Eddison Howard have been best friends for thirty years, teammates while on their high school football team, and in love with each other for two decades. Of course, neither one has actually ever admitted their feelings openly, what more acted upon them. So what remains the same is their friendship. Another thing that's remained is Woody's regular schedule of buying lottery tickets at Eddie's gas station--two tickets for Woody and one for Eddie, the latter more to tick off his best friend who refuses to play the lottery than anything else. Then Woody's renowned dumb luck finally pays off and his numbers turn out to be the winning ones and it sets of a chain of events, including both he and Eddie making a go of an honest-to-goodness non-platonic relationship. But they say that money changes everything--including people. Will it be for the better or the worse?

I only discovered Dahlia Donovan's writing last year, but I've fallen in love with this author's writing since then because her stories always have that touch of originality to them that I don't often find in the genre. With her latest book, I liked how she made the story about the proverbial journey that Woody and Eddie found themselves on when it came to their relationship with each other and their relationships with their respective families while also having the two guys on an actual journey traveling to different places around the United States and around the world. Donovan's writing has always been easy-to-read as far as I'm concerned, which is why I always get such pleasure out of reading her stuff. Both Woody and Eddie were easily likable main characters, both giving and generous and both that loved those who mattered most in their lives. There's very little angst in the story, limited mainly to Woody's estranged, bible-thumping, money-grubbing parents--and I do use that label very loosely. Pure Dumb Luck was a lighthearted read about the changes money can bring and how some remain the same. 4.5 stars. ♥