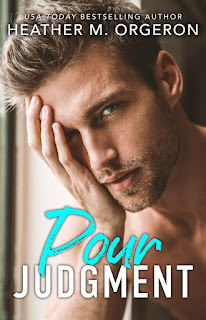 Yes! Heather M. Orgeron is back and her romantic comedy writing chops are in full form with her newest standalone, Pour Judgment. This enemies-to-lovers slash fake fiancée romance has a country music star with a reputation for being a player falling for possibly the one girl on the planet who wants nothing to do with him. He's twenty-six-year-old Rhett Taylor, the singer for the eponymous band that's made it big in the country music scene. He's got it pretty easy as far as women are concerned, but he's never met anyone quite like his best friend's cousin. Twenty-one-year-old college senior Korie Potter knows what it's like to love someone who's entrenched in the music industry, and she has no plans for a repeat performance with her being in the same position as her mother for too many years. She's made it clear to Rhett that she isn't interested in whatever he has to offer, but when she heads off to Camp Pour Judgment for spring break and he follows her there, alcohol seems to lower her inhibitions. When a photo of the two of them is leaked to the media leads to their fake engagement, could it really be a win-win scenario for both of them, or could they end up losing their hearts by the end of their arrangement?

It took a few chapters for me to fully get into the story and to feel the connection between the main characters, but once I was hooked, I was a goner for this book. Heather M. Orgeron brought the romance and the comedy in her latest rom-com, but there was also a pinch of angst thrown into the mix, so I was a happy camper. Seriously, it doesn't take a truckload of angst to satisfy my addiction to it. Korie was a breath of fresh air--confident and outspoken, she had her dream of entering and becoming successful in skateboarding competitions. She was wary of guys like Rhett, but even as she tried to remain steadfast in her refusal to be with men in the spotlight, she also listened to her heart when she realized she may have been wrong in her assumptions of him. After all, he turned out to be quite a revelation. Bits and pieces of him showed that he wasn't like every other music superstar out there. He was, without a doubt, tenacious in his pursuit of Korie, and that was part of what made their story both endearing and entertaining. Backed with a great cast of supporting characters--some of whom I wouldn't mind reading more about in the future--Rhett and Korie's romance in Pour Judgment was a real highlight read. Five stars. ♥