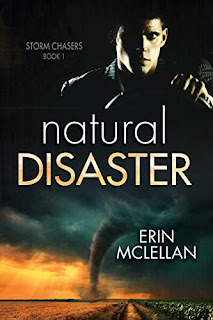 Natural Disaster is the first book in Erin McLellan's new Storm Chasers series, and it was an easy and pretty quick-paced read with a hint of enemies-to-lovers and a dash of workplace romance to it. Guthrie Gale is a reporter for KTTY News Channel 7, a local station in Oklahoma, with a preference for working on stories of a lighter fare. You would think that someone with his pedigree would have him wanting to be a storm chaser, but that's the last thing he's interested in becoming nowadays. When his boss assigns him to the weather team and is partnered with rookie storm chaser and California transplant Luke Masters, Guthrie balks, but with budget cuts and possible terminations, Guthrie knows he doesn't have much of a choice. The tension between the two of them is immediately palpable once they're in each other's company, and it's not merely due to their differences in opinion.

Erin McLellan's books have always been easy reads for me, which basically means that it's easy for me to fall into her stories, to cheer on her main characters as they go on their journeys towards their happily-ever-afters. I'm happy to say that was the case once again with her newest book, which also happens to be a series starter, so it's nicely set the bar for everything else to follow. I liked how Guthrie and Luke had this whole back and forth thing going on, sometimes surprised that others had noticed the connection that was there. I was fascinated by the storm chasing, with McLellan's research obviously thorough. Living in a country that knows all about regular and constant weather disturbances, tornadoes aren't as commonplace here, and I'm always one who loves it when I can learn a thing or two while also being happily entertained by what I'm reading. Natural Disaster gets four stars. ♥