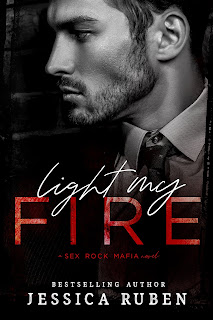 Jessica Ruben was a new-to-me author prior to my reading Light My Fire, the first novel in her Sex. Rock. Mafia. series, and the impression she's left guarantees that this isn't a one-and-done deal on my end. I will definitely be needing more from both the series and the author (I may have already started looking around Goodreads to check out her back list) because the originality and quality in this introduction to Ruben's writing was quite above par. This is a mafia romance, but not just any other mafia romance. She's diverted course from the norm, eschewing the usual Cosa Nostra and Bratva--i.e. the Italian mob and the Russian mafia, respectively--and choosing to take on the Mafia Shqiptare, aka the Albanian mafia. Admittedly, I'm far more familiar with the aforementioned "usual" mafia organizations alongside the Asian ones, but I welcomed being taken on a new journey and with a well-researched history of the war in Kosovo during the tail-end of the 90s and a well-written tale, I was totally hooked.

Elira was only ten when she fled her war-torn country of Kosovo, heading towards the freedom that the United States of America offered and the person she had to thank for saving her, her mother, and her brother was Nico. He may have only been eighteen at the time, but already he was a force to be reckoned with. More than a decade passes before their paths cross once again, and this time around, Nico has made a name for himself as the king of the Mafia Shqiptare. He is feared as much as he is revered. He knows how much power he wields, and there is one particular reason he's made his presence known--a king needs a queen and he only has one woman in mind: Elira.

I've purposely kept the details of the story to a bare minimum because Nico and Elira's story is the sort that needs to be experienced. I remember the horror stories that came out of the Kosovo War in 1998 and 1999 as it was happening and even worse after the war ended, so the Serbian invasion and proceeding ethnic cleansing in the Balkans and how it affected Albanians made what Elira and her family experienced feel more real. There's a rawness to the romance that these two have, and it's absolutely apt for the history behind their connection. Jessica Ruben has struck me stupid with admiration, all thanks to her impeccably amazing storytelling. While she does give Nico and Elira their happily-ever-after here, I'm excited to see what awaits us in the rest of her Sex. Rock. Mafia. series. If you've never read anything from this author, you need to check out this novel. Five stars for Light My Fire. ♥

Purchase Light My Fire on Amazon.