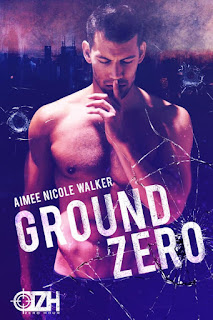 
"You should know by now I'm relentless when it comes to pursuing the things I want. Right now, there's nothing in the world I want more than you."

Oooh! If the rest of the Zero Hour series is as good as its series starter, then readers are in for one hell of a romantic suspense ride and we all have Aimee Nicole Walker to thank for it. Ground Zero opens with the brutal murder of a shock jock, which also serves as the first case of newly partnered detectives with the Major Crimes Unit (MCU), thirty-four-year-old Sawyer Key and thirty-three-year-old Royce Locke. Sawyer receives wishes of luck and from the moment his new partner gives him a glare filled with disdain, it's obvious why those wishes were thrown his way. The two don't exactly have the most auspicious of beginnings to their partnership, but with the murder of such an infamous personality, solving the case needs to take precedence over Royce's far from warm welcome of Sawyer and Sawyer's swift attraction to the man who is straight. Things are tense between the new partners. Royce is still mourning the death of his late partner and best friend, Sawyer is trying to keep his promise to his late husband by moving forward. Solving their case may be easier than getting over their differences. Maybe.

Oh my! This was such an amazing start to Aimee Nicole Walker's new series. I love that it has the romantic suspense feels of her Curl Up and Dye Mysteries series but multiplied several times over. This had more grit and angst to it, which is part and parcel of how it separates itself from Walker's past work. Sawyer Key and Royce Locke had that delicious sort of tension that I like in my main characters, and they had the most interesting back stories that made them, not only easy to empathize with, but also the sort that had me curious as to how they were going to evolve and then come together as work partners and as a couple. The mystery aspect of the story could have been easily drowned out by the romance, but the author struck a fabulous balance between the two, making for an enticing read from all sides. The conclusion to the case that Sawyer and Royce was handling was unexpected, as was where their relationship is at, both of which I loved because who doesn't love it when an author manages to surprise them, leave them satisfied, AND wanting for even more?! I floved this. Ground Zero garners five-plus stars. ♥