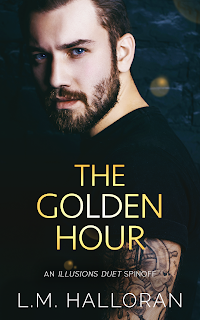 The Golden Hour is a standalone spin-off of the Illusions duet--which, in turn, is a spin-off of the Visions series--all of which were penned by L.M. Halloran. This is Finn McCowen's story, one that he shares with Callisto Avellino, and at its core, it's all about wanting vengeance but needing something more instead. Finn wants revenge on the man who killed his father, and in Callisto, he isn't sure if what he's found is a partner or a pawn. After all, she was an heiress, the kind that you assume led a privileged and pampered life, one expected to uphold the legacy of the family she was born into. The family she belonged to was led by the man Finn has set his sights on--her father and his father's murderer. It was six years ago when she disappeared without a word. She claims she couldn't be a part of the her family--a family that she would rather shun than whose vileness and corruption she would be subject to had she stayed. Callisto wants the same thing that Finn does: to bring the Avellions to their knees no matter what.

This was a good read, one that had an intriguing story and an interesting but strong dynamic between the main characters. It was a pretty fast-paced read, without any dilly-dallying that serves more as distraction than actually helping the story move forward. I was already impressed with the author's Illusions duet, which was my introduction to L.M. Halloran's writing. With their respective pasts and everything that tied them together, I was curious to see how they would overcome any distrust and how their relationship would evolve as the story progressed. I'm quite happy to say that I wasn't the least bit disappointed with how everything turned out. Halloran's writing was much on-point and has me looking forward to what's next. 4.5 stars go to The Golden Hour. ♥

Purchase The Golden Hour on Amazon.