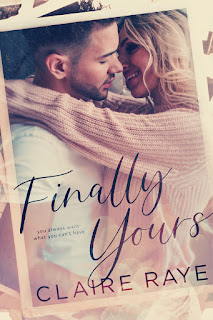 Finally Yours is the first full-length novel in the Love & Wine series from the writing duo of Claire Raye, and it serves as my introduction to their writing. There is a free prequel novella entitled Always Yours but it features a different couple and doesn't necessarily need to be read in order to fully enjoy or understand the events that unfold in this new book. This is an enemies-to-lovers story between a thirty-year-old Aussie and wine maker named Jack Wilson and a twenty-nine-year-old vineyard and winery owner named Lauren Somerville. Fourteen years ago, Jack spent two months at the Somerville Winery and Vineyard while his father, a renowned winemaker, helped Lauren's parents with new machinery they had up and running. Lauren's memories of that time weren't exactly warm and fuzzy, but when Jack returns nearly a decade and a half later to take care of the same crusher his now retired father once installed, he stirs up a whole slew of new feelings within her. Even if they choose to give in to their attraction to each other, this can never be anything more than a temporary thing...or could it be something more?

I'm feeling a tad torn about this book. For a good portion of it--let's say about three quarters--I found myself entertained, even if both Lauren and Jack were rather immature both as teenagers and as adults. Jack's treatment of Lauren during their first go-around as teens seemed more like what a little boy would do to the girl he was crushing on. He was also assuming that she was totally into him and kept making sexual innuendos within the first twenty-four hours of his return to Napa! Then there was Lauren who was all hot and cold even when it was very obvious that she was into him as much he was into her. Immature behavior aside, I did like seeing how their relationship evolved. The banter between Jack and Lauren made for lighthearted moments, and Lauren's nephew and niece provided good comic relief. Everything was going relatively well until drama came along. I'm all for drama and angst but too much of a good thing often spoils the experience. All things considered, the book's first three quarters snags four stars and the last quarter three stars, leading to an average of 3.5 stars for Finally Yours. ♥