Review: Dreams of 18 by Saffron A. Kent 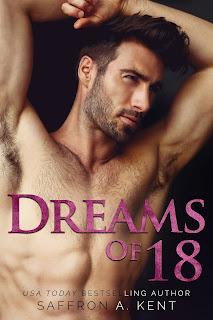 I've read all of Saffron A. Kent's published work and a couple have connected with me more than others. Her last release, Bad Boy Blues, is one of my favorite reads this year, so I admittedly had higher than usual expectations for her newest standalone, Dreams of 18. This age gap romance had Kent's always notable writing style, one that never fails to impress me with its quality and originality. The main characters here are Violet Moore and Graham Edwards. When she first begins to develop feelings for the man, she's only sixteen. Not only is Mr. Edwards eighteen years older than she is, he also happens to be the father of her best friend, Brian. She decides to wait two years to sneak a kiss from the man she's never been able to stop thinking about, but it's a kiss that sparks a whole lot of trial and tribulation for both of them. It becomes a scandal that leads to her being slut-shamed and him disappearing without a word. Friendships are broken and reputations are tarnished, but Violet has a plan--one that involves finding Mr. Edwards, but bringing him back with her. Kissing him again isn't part of her plan. At all. Maybe.

Writing this review has been a stop-and-start process, meaning I try to gather my thoughts together, start typing on my laptop and then stop because I'm not sure if I'm explaining myself well. See, this book had its ups and downs. There were moments that I considered swoon-worthy and others, well, not so much. There was a portion of the book where Violet appeared to be this girl who had an air of confidence about her, almost as if she were far more mature for her age. But then it was as if a switch was flipped in the latter part of the book, what with some cringe-worthy behavior coming from her when she was with Graham. Speaking of Graham, the man was...erm...not exactly my favorite male main character. His treatment of Violet bordered on abhorrent at times, and just like her, there would be this switching of gears where he became either tolerant of the much younger girl or actually sweet with her. So basically, that's how it was for me as well. At times, I liked what I was reading, and then other times, I wasn't a huge fan of. Saffron A. Kent is a talent author, and Dreams of 18 was an okay read. I just had higher expectations for it, and while some were met, some were not, which is why this garners three stars. ♥

Purchase Dreams of 18 on Amazon.