Review: Chronicles of a Rockin' Mess by S.E. Rose 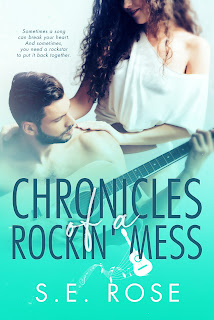 Chronicles of a Rockin' Mess is the newest standalone from S.E. Rose, and it's the story of the lead singer of a rock band who knows how to command the stage and easily find a willing woman to keep him company for a short period of time. Lincoln Grant's never been known to commit to any female, with the only constants in his life being his band mates who are more like his brothers, his music, the memory of his late sister, and his personal assistant. Lark Sutton is good at managing every single detail about Lincoln's personal and professional life, making sure to keep his life in order, which isn't exactly easy when her boss happens to make a habit of messing everything up with his shenanigans. She's been with him since she was eighteen, giving her a chance to still be surrounded by music even as her dream of becoming a singer and songwriter were shot down viciously. Three years later, all seems well, except Lark still has that crush on Lincoln, and well, she could never be anything more than his PA. But when Lincoln does the unforgivable and Lark quits, she finally follows her dream of performing...that is, until a year and a half passes and she gets a phone call asking her to come back because Lincoln's even more of a rockin' mess.

This was a slow burn story that had both main characters keeping their feelings from each other, believing they weren't worthy enough to be together. I really liked Lincoln, who was every bit the rock star and had no shame living the rock star lifestyle. However, there's a whole lot to him behind that celebrity persona of his, and the loss he continues to cover over the passing of his younger sister was heartrending. I wasn't a fan of him sleeping around, although let's face it, it wasn't as if he and Lark were in a committed relationship and neither one of them were actually even considering being a couple, thinking all they were ever going to be was employer-employee. She's got her own woes in life, what with that record producer crushing her dreams and her estranged relationship with her family, although that wasn't really delved into as much as I had expected, with nothing more than a mention once or twice. This was a good read, one where we saw Lincoln and Lark's relationship evolving from professional to platonic before becoming more, but it did feel as if we only get to skim the surface of their surface and never really dive in as deep as I would've hoped. Still, Chronicles of a Rockin' Mess was a rockin' four-star read. ♥