Review: Caught in the Lies by Kacey Shea 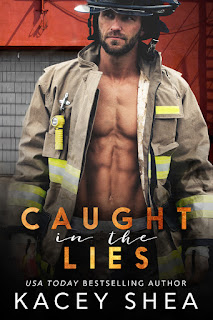 Caught in the Lies is the latest release from Kacey Shea. While this novel is a standalone, I'm going to recommend you check out the free prequel novella, One Hot Night, which lays out the beginnings of Cameron McClain and Jill...okay, I'm pretty sure her last name wasn't mentioned in either the novel or the novella, but if it was, please feel free to let me know what it is in the comments! You can also read the companion novel, Caught in the Flames, which was released back in 2016, which is where the cast of characters were introduced, but it isn't an absolute necessity to read it before reading this newest book. Cam and Jill's story starts with an unsolicited photo of Cam's...erm...hose, and it's enough to make a heck of an impression on Jill. What follows are hook-ups galore, but nothing more, not when she isn't looking for any type of commitment from him or any other guy. They're not meant for anything more than hooking up anyway. After all, there's the age difference, the bossiness, and the secrets she's keeping. It turns out, however, that Cam's got his own secrets, and now it's too late because Jill's gone and done the unthinkable--she's fallen for him, and all those lies they've been trading guarantee heartbreak.

I'll be honest--Caught in the Flames was a hit-and-miss story for me, so I may have been a teeny, tiny bit conservative in my expectations for Caught in the Lies. But boy, oh boy, did Kacey Shea knock those expectations out of the water and erased any doubts in absolute fashion. Like the title states, there are lies as well as secrets within this non-relationship that was supposed to be nothing more than casual between Cam and Jill. Now, I don't want to mention what those lies and secrets were, but suffice it to say that they are substantial ones and not the sort that you can easily brush away with an apology. Engaging in a no-strings-attached sort of situation may have seemed like the sensible thing for Cam and Jill, but if you're an avid romance reader, you know that they didn't stay simple for long, especially when all the complications start rolling in. I was totally caught in all things Caught in the Lies from beginning to end, having been quite invested in Cam and Jill's very satisfying happily-ever-after. Five stars. ♥

Purchase Caught in the Lies on Amazon.