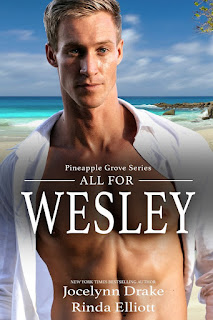 Note: An advanced reader copy (ARC) was provided by the author via Indigo Marketing & Design.

The awesome writing team of Jocelynn Drake and Rinda Elliott are back in Pineapple Grove, Florida! Yes, we finally have the second novel in their Pineapple Grove series, and it's an enemies-to-lovers story between a bed-and-breakfast owner and a property developer. Wesley Blake is the sole holdout among the proprietors on a prime block of real estate in Pineapple Grove that Nathan Randall has had his eye on for quite some time. For nearly a year, Nathan has been successfully chipped away at the business owners along that block and he's gotten every single one of them to agree to sell to him...except for Wes. Nathan's frustrated but he's also drawn to the man who has told him time and again that he will never, ever sell the Wilton Cottage to the hotelier. Every single time they spar, sparks fly, until one night sets of a different set of sparks--one that has the heat simmering between them for months boiling over. Now, the two can't seem to get enough of each other, but other than secretly sleeping together, nothing else has really changed. Will one have to give up their dream in order to gain the other's heart?

I love reading Drake and Elliott's Unbreakable Bonds and Ward Security series, but their Pineapple Grove books are a whole different feel. Okay, maybe not entirely different because there are still the strong connections between the main characters and the romance and the sex that fans and readers have come to associate with this writing duo. The feel, however, is lighter compared to the authors' romantic suspense novels, and who doesn't like it when the authors they love are able to go in a different direction and still whip out fantastic and addictive reads? Their second full-length novel set in Pineapple Grove, Florida was every bit as fun to read as the first one, Something About Jace, thanks in large part to the palpable chemistry between the main characters. There's more to Nathan's quest to procure land and build a hotel in the popular tourist town, and I actually liked getting to know the guy behind the mogul. He definitely needed someone like Wes to open soften him up (and I'm super tempted to make a dirty joke, but I'm trying to keep this review GP). Drake and Elliott don't disappoint with All for Wesley. Five stars. ♥

Read my reviews for the Pineapple Grove series:

Something About Jace (book one) - five-plus stars - My Review

All for Wesley (book two) - five stars - My Review (posted above)

Purchase All for Wesley on Amazon.