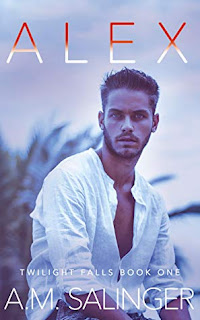 Prior to me reading this series starter, A.M. Salinger was a new-to-me author and within the first few chapters of Alex, I knew without a shadow of a doubt that I should be ashamed of myself. Why? Well, I've clearly been missing out on this author's writing, and now I'm not only eager to read more from her Twilight Falls series but I've added her Nights collection to my never-ending to-be-read list. Salinger's new series starter is set in the fictional California town of Twilight Falls, and I think it'll be about a group of friends known as the Terrible Seven--Alex Hancock, Drake Jackson, Wyatt Batista, Tristan Hart, Hunter Thomson, Carter Wilson, and Miles Martinez--but that's purely guesswork on my end, although I'm really hoping I'm right because my curiosity is at an all-time high!

Alex Hancock is a lawyer who left his hometown at eighteen and finds his way back twelve years later when his partner at the law practice they share embezzles half a million dollars in funds and an opportunity to be paid that exact amount comes in the form of an arranged six-month marriage with an old friend's client. Where Alex was expecting a bride waiting for him at the courthouse, however, stands a broody man who looks just as shocked as him instead. After all, in the three years since Finn West lost his wife to cancer, he'd never considered remarrying, but his great aunt's edict that he be married or lose his trust fund has forced his hand. He just never thought he'd have a groom this time around, nor did he think it possible for his new husband to stir feelings within him he'd never had before. Each man took a chance marrying a stranger; will both of them take a risk at falling in love again?

To be honest, the whole fake relationship slash arranged marriage trope is one I have a love-hate relationship--I either love it or hate it, depending on what sort of story the author has to tell. With this series starter, A.M. Salinger took me by surprise with her creative touches to a well-worn trope. From the direction the story took to the interesting cast of characters--very ably led by two of unforgettable main characters who share such a strong connection--Salinger had me from the get-go, and there was nothing that could take away my attention from this book during the entire time I had my tablet. As easy to read as this novel was, it had a good amount of angst that I loved and a fine balance of lighthearted humor that left me more than satisfied alongside the romance and sex. I also quite liked the dynamics within the circle of friends that Alex had, a circle of friends which embraced Finn quite nicely. I'm giving Alex a well-deserved five-star rating and it has left me with high expectations for book two. ♥