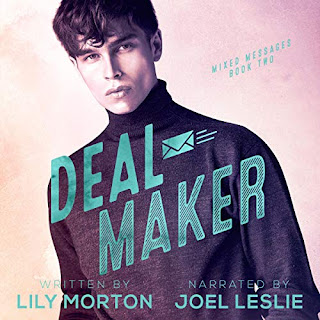 Two audiobooks in and I may be a wee bit obsessed with the combined talents of Lily Morton and Joel Leslie. Morton's Mixed Messages is the first in her published works that has been made into audiobooks, and deservedly so. I'm not sure what process was employed when it came to choose Leslie as the voice behind the stories--although I suspect Morton had either the sole or final say--but however that came about, I would like to bow before their feet and say thank you because I couldn't imagine anyone else narrating these wonderful stories with as much as prowess and passion as Leslie.

Twenty-nine-year-old model Jude Bailey is in need of a place to stay after his upstairs neighbor's bathtub falls into his bedroom. When a friend slash occasional hook-up and fellow model offers up his stepbrother's home in exchange for Jude helping out as a personal assistant, Jude agrees. The last thing Jude expects is to find out that not only does this Asa Jacobs have a young son and is a famous actor, the man has an aversion to models in general. When their misgivings towards each other gives way to their mutual attraction, Jude and Asa agree to nothing more than a summer fling. After all, with Jude's aversion to relationship and Asa's experience with his ex, theirs could never be a permanent thing. Right?

Jude and Asa were both keeping certain aspects of their pasts close to the vest for a good portion of the story, but it was so clear just how in sync they were with each other. I loved how their relationship went from adversarial to one of a far more passionate nature, with a whole lot of romance to boot. These two pushed each other's buttons and it was so darn entertaining. Even the introductions per chapter in the form of answers to fan letters Asa received--and which Jude was answering in his cheeky way--were comedic fodder. I also appreciated the appearances from Dylan and Gabe (Rule Breaker, Mixed Messages book one), as well as supporting characters Billy, Peggy, Amos, and Dean (yes, DEAN!) who were perfectly placed accents to make this even more memorable of a listen. With Lily Morton's fabulous writing effort and Joel Leslie's awesome narration, Deal Maker--just like its predecessor, has landed on my list of 2019 favorites. Five-plus stars!