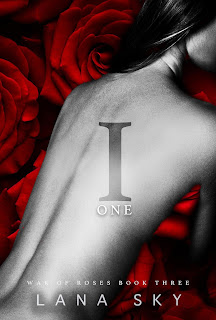 I admit it; I was extremely nervous going into this final novel in the War of Roses series from Lana Sky. My introductory read from her was her Savage Fall duet, and while that got off to a stellar start, the end fell short for me. So, I've tempered my expectations with this trilogy, a lot of it for fear that my expectations for the previous duet had been too high. The first book in this new trilogy had me demanding more, and the second one had me anxious but excited. This third novel? Well, it was everything I could have hoped for. Was I (One) the sort of series ender that had all those pesky loose ends tied up neatly and everyone on God's green earth gets a happy ending? No, and I honestly prefer it that way mainly because it feels more realistic, and Lana Sky? She made me feel with this book. I never doubted Sky had a gift for writing stories, and she was able to put together one hell of a trilogy.

For too long, Ellen Winthrop felt like nothing more than a pawn in a vicious game. She thought her path had already been paved for her, and like it or not, she had to follow it. But then she learns a thing or two, and now, she hold not only her fate in her hands but that of Mischa Stepanov as well. In order for both of them to make it to the other side of everything that's been happening, Ellen will have to hold firm and listen to her own conscience and gut. Figuring out who are their true enemies from their friends and deciphering the lies from the truths could prove to be difficult, but if they want to set themselves free from all the shackles, they'll need true breakthroughs.

A quick reminder: This book is part of a trilogy involving a continuing story line, and the first two books do have cliffhanger-type endings, so everything MUST be read in order--XV (Fifteen), VII (Seven), and I (One). Lana Sky impressed with this series, keeping the quality of writing, story and character developments, and overall pacing on point, which isn't necessarily as easy as it sounds since it's difficult enough to maintain in one book, what more throughout an entire trilogy. Ellen was an honest-to-goodness heroine, one who evolved from who she was in the beginning to the woman who emerges at the end. Mischa was...Mischa, a man who wasn't particularly easy to like, but someone who went through his own changes too. The War of Roses series is a must-read. Five stars for I (One). ♥

Read my reviews for the War of Roses series: