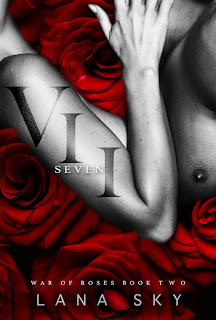 I'll be honest: I had to lower my expectations for VII (Seven), the second novel in Lana Sky's War of Roses trilogy, from astronomical and that had everything to do with my previous series read from her, which was her Savage Fall duet. That one started off fantastically strong, but the second book faltered greatly and I'd had extremely high expectations for it. So yes, I made a conscious effort to keep my expectations realistic, and well, Sky blew those out of the water. This sequel had everything I had secretly hoped for. Now, of course, I find myself quite anxious about that cliffhanger ending and am already itching for the conclusion of the series. And yes, my expectations ARE high.

Ellen Winthrop is still held captive and under the control of Mischa Stepanov. He may provide her protection but that protection has come at a very high cost. The thing is, the more time she's with him and experiencing everything he does to her, the more she's dragged into the depths of the violence and depravity that his world embodies. He never fully answers her questions but he does offer up crumbs of information that he believes should more than satisfy her curiosity. Whatever little Ellen thinks she knows, she may sadly be ill-prepared for the harsh truth once it's all revealed to her. By then, though, will she be able to survive the relentlessness of Mischa?

You'd think by now, my utter dislike for Mischa would have lessened, but nope. I still don't like him and at this point, I honestly doubt the guy is even redeemable. Here's the thing, though: he isn't pussyfooting about who he is and what he does to Ellen. He is every bit the hard and violent man that he is and he makes no apologies for any of it. There are bits and pieces about him that are coming to light, but he's as enigmatic as ever, and just like Ellen, I'm both leery and fascinated by the man. And Ellen? Well, I'd be freaked out if I were, and you can see the fear, but again, you can also see her fascination. VII (Seven) snags five stars, and now the countdown begins for book three. ♥

Read my reviews for the War of Roses series: