Review: In the Crossfire by L.P. Dover (Circle of Justice #4) 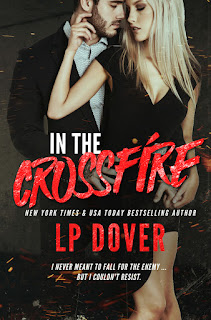 In the Crossfire is the fourth novel in the Circle of Justice series from bestselling author L.P. Dover, and it's the long-awaited story of Bryce Chandler, an FBI agent and a member of the clandestine Circle of Justice. While this is part of a series, it can be read as a standalone, ALTHOUGH (and for those of you who are familiar with my reviews, this shouldn't come as a surprise) I do recommend you read the previous other books, mainly to give you a better understanding of the group that the Chandlers are a part of. But again, you can read this new one independently. Now, if you're like me and have already read the three earlier releases, or at the very least, the third book, a huge chunk of this fourth one does follow the same timeline as Aim. A quick FYI: Ian Chandler (whose story plays out in Aim) is Bryce Chandler's twin brother, and Wade Chandler (from Target) is the eldest among all the four brothers.

In order to get as close as possible to his target, thirty-year-old Bryce Chandler has gone undercover and has infiltrated one of the most powerful mafia families around. Anthony Corsino has entrusted him with his precious twenty-eight-year-old daughter, Layla. Watching over Layla was supposed to be nothing more than a part of his job, but Bryce finds himself drawn to the woman who is as beautiful as she is smart and confident. She may not be actually involved in any of her father's illegal doings, but that doesn't mean it's okay for Bryce to become involved with her. However, Bryce is in too deep; he knows there's too much at risk at this point. If he fulfills his mission, he hurts the woman he's falling for and may very well lose her; but if he doesn't fulfill it, he may still lose everything.

The wait may have been almost two years, but it was worth it to get Bryce's story. I liked the interactions between Bryce and Layla, the latter proving to be a more than worthy partner to the former. She held her own and she didn't cower in fear when faced with adversity. The book does play out over a year and a half so it's longer than the first three novels--either that or it felt that way to me, not that I'm complaining. I'm not entirely sure if this is the last book in the series, and I'm hoping it isn't because I'm still hoping Reed gets his own book someday, but I am excited over the author's planned spin-off series, Mafia Brothers. In the Crossfire receives 4.5 stars out of five stars. ♥

Read my reviews for the Circle of Justice series:

Purchase In the Crossfire on Amazon | Apple Books | B&N | Kobo.