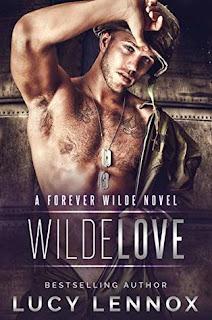 “When those bad memories hit, think of those three perfect angels, Doc. They'll guide you home.”

“And what about you? What do you think about when the bad memories hit, Major?”

You, I wanted to say. And that deep blue endless sea.

“Peace,” I said instead. Because to me, they were pretty much the same thing.

I'm about to confess something that I fear will have some of my fellow romance readers, especially those who share my love for M/M romances, to curse me to the highest heavens. You see, I have yet to read Lucy Lennox's Made Marian and Forever Wilde series. Yep, I'm totally cringing in embarrassment admitting that out loud. I know, I know, it's sad but true, even though I've had one friend badgering me about reading the books already since last year. I have no one to blame but myself and my excessively long to-be-read list and over-stuffed ARC (advanced reader copy) reading schedule. And me being the kind of reader that I am, reading a series out of sync is a rarity, but my curiosity got the better of me. I mean, this isn't my first Lucy Lennox read--that honor goes to IRL, and yes, that basically means that I only started reading her books this year--but the opportunity came along and I would have been nuts to say "no," right? So, I set aside my need to read books in a series in order and just jumped into Wilde Love, book six in the series; now I seriously need to catch up on all things Forever Wilde AND Made Marian!

I'm going to go ahead and just label Wilde Love the origin story of Forever Wilde. It was 1968 in war-torn Vietnam when William Wilde and Weston Marian met. Liam was twenty-two and a second lieutenant to Wes's thirty-two and rank of major. Liam had a ready grin and a lightheartedness to him while Wes was far more stoic and gruff. Yet these two were to become the best of friends, even as Wes wished for far more and knew it would never be anything more than wishful thinking on his part. You see, what made Liam and Weston different as well was Liam was married with children and very much straight and Weston...well...wasn't. Being gay in the military was a secret that was never meant to be divulged, but Weston's revelation is met with Liam's acceptance and some curiosity. But before you think that there is cheating in this book, stop right there. I'm not one for spoilers, but let me just stress that there is NO cheating that happens. Suffice to say that a lot of what happens in this book took me by surprise, and that's a great thing because then it isn't like every other book out there. Nope, this is extraordinary.

This was such a beautifully written and awe-inspiring story of friendship, family, and love and the bonds that tie those who matter most together. I was absolutely emotionally invested in Liam and Wes's story because even though I already knew they got their happily-ever-after, their journey getting there wasn't necessarily an easy one. These two were tried and tested more than once, and goodness, but don't we all wish we had as much faith and fortitude as either one of them did. They were a formidable pair, and they had their ups and downs, but you know how they say that love conquers all? Well, Liam and Wes's story proves exactly that. There were a couple of times that I got teary-eyed but there was one point in the story--clue: it was close to the end of the book--wherein I just flat-out cried. From the gut-wrenching realities of war to the all-too real homophobia--something which, sadly, still exists to this day--and from the nightmarish pain of loss to the life-changing realization of love found, Wilde Love highlights what has became a mantra in the present: Love is love IS LOVE. Well done, Lucy Lennox. Five-plus stars. ♥