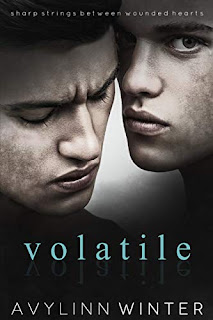 Volatile is the first novel in Avylinn Winter's Treacherous Chemistry series, although I do recommend you check out the prequel, Oblivious, which is available on Wattpad and is technically still up in the air even though it hasn't been updated in a couple of years. That being said, I believe you could dive into this full-length read and still comprehend and appreciate what's going on. I've recommended the prequel in order for potential and future readers to fully understand the back story concerning one of the main characters here, Chris Sinclair, although to be honest, because the prequel doesn't have a firm ending, there are details mentioned in this first novel that pretty much become spoilers of sorts as to what has become of the main characters in Oblivious as well as one supporting character. Basically, whichever way you choose to go, you'll still get what's happening within Volatile.

With the loss of his mother still at the forefront of his mind, Chris Sinclair feels aimless, unsure of which direction his life should head towards, especially since he's so close to becoming an adult. When he's given the opportunity to work as the assistant slash companion to renowned violinist Dante Heron while Dante is on his European tour, he decides to take it. Soon though, it becomes glaringly obvious that he's ill-prepared for what his new job entails or for the swirl of emotions being around Dante is causing him. As they make their way around Europe, Chris falls for Dante even more, but with Dante running hot and cold on him, Chris isn't sure if he's going to end up falling alone with no one to catch him. Will these two be able to bridge the gap before everything becomes too volatile?

I read Oblivious on Wattpad prior to reading Volatile, so this is technically not my first read from Avylinn Winter, but that unfinished prequel only gave me an idea of the promise this author had, and now having finished this first full-length read in her Treacherous Chemistry series, I can see why she received the favorable reviews she did when this book was originally published a few years ago. This self-published edition now includes material from a short story entitled Magnetic and has been expanded, but since I never read the original version of either the novel or the short, I can't really tell you what the changes, if any, are. Either way, Volatile was a well-written, 4.5-star read. ♥