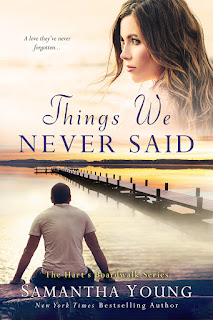 I enjoyed the first two novels in the Hart's Boardwalk series, but I dare say that Things We Never Said is the best one among the three so far. Samantha Young has penned a second-chance love story that feels more like the tale of two people finally taking a chance on the love they share. Dahlia McGuire escaped to Hartwell, Delaware and has made the most of her life there ever since. Returning to her hometown of Boston, Massachusetts was something she'd never considered doing until she learned just how much her beloved father needed her back. Maybe the time had finally come for her to face up to everything that happened in the past that led to her leaving, but will she ever really be ready to come face to face with Michael Sullivan, her ex-boyfriend's best friend and the man she hopelessly fell in love with even when she knew she shouldn't have? And while Michael is still hurt by her abandonment, she remains the woman he's never been able to get over...the one his heart has never forgotten. Is it time for Dahlia and Michael to lay bare everything they've kept inside or were they better off suffering in silence?

Ah, how my heart broke for both Dahlia and Michael! Barry Manilow said it best: "We had the right love at the wrong time," and that was exactly how it was for these two. They met, they connected, but she had a boyfriend who just happened to be best friends with him. Talk about complicated. But this book isn't just about the complications of their non-relationship but also about Dahlia's back story and what led her to leave everything behind all those years ago and head to Hartwell. If you're as much of a fan of angst as I am, we get it here in spades, but as heavy as some parts of the book happen to be, it isn't all doom and gloom between the covers. There are definitely a number of lighthearted moments and let's not forget about the swoon-worthy ones because hello, who doesn't read romance and live for the opportunity to sigh happily for the couple we're reading about? Once again, Samantha Young's writing has tugged at every single one of my heartstrings while also managing to leave me oh-so-satisfied with yet another wonderful read. I'm awarding Things We Never Said five out of five stars. ♥