Review: Then He Happened by Claudia Burgoa 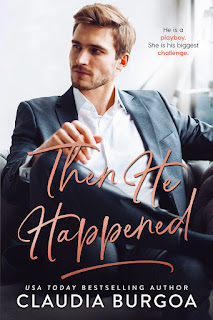 After the first Spearman brother got his happily-ever-after in Maybe Later, Claudia Burgoa gives the next brother a chance for his own happy ending in Then He Happened. Jason Spearman is thirty-five and isn't looking to settle down anytime soon. He owns his playboy image and makes no apologies for it. He no longer believes in love or any of that happily-ever-after stuff. He's good with living his life to the fullest. Then he meets twenty-six-year-old Eileen McBean, a woman who's used to be her parents' afterthought and not getting the attention she deserves. Well, Jason is definitely paying attention, but as much as Eileen would love to bask in it, she's quite aware of his reputation when it comes to women. She isn't a good-time sort of girl and she's not the type of woman you simply hook up with. Not only does Eileen pique Jason's curiosity, but she's absolutely immune to his usual arsenal of moves and qualities that have had other women pining for a shot with him. Jason wants to prove to Eileen that there's more to him than meets the eye, but how does a man like him show that he's worthy of a woman like her?

Claudia Burgoa is one of my go-to authors and she has yet to steer me wrong. She has once again written a contemporary romance that has a whole lot of heart with doses of both lighthearted fare and a hint of angst. Jason is a playboy who used to believe in love and commitment before the person he believed he'd spend the rest of his life with upped and broke his heart. I liked that Eileen proved to be a challenge for someone like him who's had it rather easy when it comes to the opposite sex. She was someone who had me from the get-go and if anyone deserved to have equal parts attention and affection, it was her. I could absolutely empathize with her situation, but she wasn't the type to whine and complain about it, which is why it was also easier for me to like her. Together, these main characters had the sort of connection that grows on you, and we really get to see them build a strong foundation for what follows next. There's very little for me to quibble about, which is why it's easy for me to give Then He Happened five stars out of five stars. Here's to seeing what this author has up next for each of her readers! ♥

Purchase Then He Happened on Amazon | Apple Books | Kobo.