Review: That Second Chance by Meghan Quinn (Getting Lucky #1) 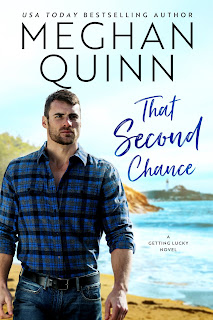 When love offers up a second chance for you to find it, do you grab it with both or let it go for the good of the person you've fallen for? That's the quandary that thirty-year-old widower Griffin Knightly finds himself in when it comes to twenty-eight-year-old Los Angeles, California native turned Port Snow, Maine transplant and new algebra teacher Ren Winters. Griff blames himself for what happened to his late wife, Claire, and that burden of guilt haunts him two years after he lost her. You see, a curse was put upon him and his three younger brothers--Rogan, Reid, and Brig--by a palm reader that they'd angered in New Orleans. Now, as eligible as the four single Knightly brothers may be, none of the single women in the hometown will have anything to do with them for fear of falling victim to the "curse". So as attracted as he may be to Ren, Griffin knows that he can't act on it, not when the last thing he wants is for harm to come to the one woman in two years he's felt something for. But Ren knows all about second chances, and she hopes to show the man she's falling for that what they have is worth taking a chance on.

Ah, Meghan Quinn does it again! She's kicked off her new Getting Lucky series, which I'm guessing is about the four Knightly brothers (or at least I hope it is about the four of them and maybe even a possible spin-off...maybe?) who live in the picturesque--and gossip-hungry--town of Port Snow, with That Second Chance. I loved getting to know the very close-knit, albeit very nosy--Knightly clan: from the parents to the siblings, led by the eldest and the only sister and only married one with kids among the brood, Jen--as much as I did Ren and the supporting cast of characters. (Side note: There were a couple of familiar characters, especially if you're a fan of Quinn's Dating by Numbers series.) Now, the reason for Griffin waffling as much as he did regarding what to do with his situation with Ren may seem like a case of much ado about nothing, but I know all too well what it's like to have stuff like curses and superstition be taken seriously by other people, and considering the timing of the palm reader's curse and what happened to Claire, I totally get why Griff was as adamant about not being pressured into any relationships.

This was a romantic comedy read with a couple pinches of angst thrown into the mix, and it's something I've come to expect in this author's books. Meghan Quinn tickles my funny bone while tugging on my heartstrings and she does it so freaking well! She's written this series starter the way it needs to be written: by giving readers the love story between the main characters while also ensuring that we fall in love with the supporting characters who'll be gracing us and this series with their presence all throughout. So, the emotional investment I've made here isn't just with Griffin and Ren but with Rogan, Reid, and Brig. The rest of the Knightlys (the parents and Jen) have already gotten their happily-ever-afters, and with Griff and Ren working their way towards their own, I'm quite excited to see how the three remaining guys fare. I'm also curious about some of their friends, i.e. Jake and Oliver, and if they'll be part of a possible spin-off. Have I gone waaay ahead of myself? Yeah, lots of wishful thinking on my part, but hey, you never know! As of now, I'm basking in the HEA goodness of That Second Chance, which gets five stars. ♥

Pre-order That Second Chance on Amazon.