Review: Something That Could Last by Ashley Cade (Wild Hearts #1) 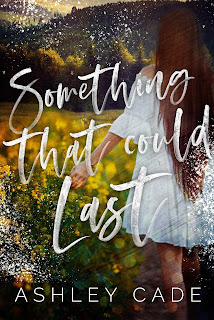 Something That Could Last is the debut release from Ashley Cade, and, unbeknownst to me when I started reading this book, it's the first in a duet entitled Wild Hearts. So yeah, I was basically happily reading along until I got to the end and BAM! Cliffhanger. Argh! I'm usually frustrated when it comes to cliffy endings, but I was really clueless about this being part one in a duology, so my frustration level was higher than usual. Sigh. But hey, I can't really complain too much considering I liked what I'd read, enough so that I'm looking forward to reading the second book, which has no title nor release date as of yet. I'm going to have to work on my patience at this point in time!

When twenty-three-year-old engineering major Jacob Daniels heads to West Virginia for some time away from the pressures of school and family, the last thing he expects is to be smitten by a country girl. Twenty-one-year-old Abby Harris is both sassy and sweet and not the sort of girl that other people would have paired Jacob up with. He's the boy who grew up in privilege and prestige and she's the girl who knows what it's like to work for what you need and struggle for what you want. Starting something with her sounds like a disaster in the making, what with only two weeks before he has to return to the real world, but being with Abby is a risk Jacob thinks is worth taking.

For a romance that starts and "ends" in two weeks, this was a rather lengthy read, but Ashley Cade shows definite promise and I liked how she put her own touch on a story of two people coming from two different worlds yet still finding love and hoping for a future together. There was a bit of angst, which I love, but overall, this was a fairly light read with humor and heart. The cast of characters was commendable, led by Abby and Jacob, and the supporting characters were notable without being scene-stealers. While I'm frustrated that I had no idea this was part of a duet, I shall await the sequel to see how everything is resolved. Four stars for Something That Could Last. ♥

Purchase Something That Could Last on Amazon | Apple Books | Kobo.