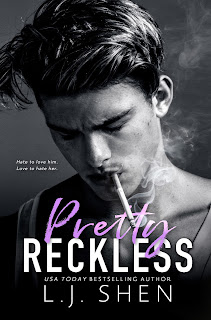 I love you, Daria Followhill, and I think you love me, too. In fact, I think we fell at the same time. You, like rain, in drizzles, over the weeks. Me, like the fucking sky above my head, all at once, crashing without the faintest chance of stopping.

“You were never a drizzle, Penn Scully. When I fell for you, you came beating down, and I felt you everywhere. You were hail.”


Oh. My. Marx!!! That may sound like an odd exclamation to you, but once you find yourselves touched by all things Pretty Reckless, you'll realize the significance of it. This All Saints High series starter is one of the most anticipated reads for this year, and for good reason. This is, after all, a spin-off of L.J. Shen's much-loved and highly acclaimed Sinners of Saint series, with the next generation--aka the spawn--of the couples from the original series. As you can tell from the series title itself, these are set in high school, but this is so not young adult (YA) in terms of theme even though most of the characters do fall under that age group. Book one has a more new adult (NA) feel to it, one that I suspect will carry over throughout, but regardless of which sub-genre you choose to classify this under, this is, very simply put, one of the best reads you'll have the privilege of experiencing. Prepare to be awed.

When Daria Followhill and Penn Scully first met at fourteen, it was like the stars aligning--like their paths were meant to intersect for good reason. But all it took was one shared secret from her and one spontaneous action from him for the dominoes to begin tumbling. He blames her for taking the most important thing in his life, and over the next four years, he makes it his life's mission to make her pay. They belong to rival schools--she from All Saints High in Todos Santos and he from Las Juntas in San Diego--but he's been living right across from her, tormenting and tempting her. He once asked her to promise him all her firsts, and he intends to take every single one of them, including being the first person to ever break her. But in this quest for vengeance, not everything is what it seems and when one or more end up becoming too reckless, more is at stake than merely a broken heart.

The men and women from Sinners of Saint are truly in a class all their own, but based on what I saw in this All Saints High series starter, it looks like the boys and girls here are set to give the "older" generation a run for their money. I know it's been said that revenge is best served cold, but in the case of Penn and Daria, well, revenge turned out to be scorchingly hot. These two and their story highlighted that sometimes, you hate the ones you love and you love the ones you hate. There is, after all, a very thin line between the two emotions and Daria and Penn certainly had no qualms traipsing along and over it time and again. There was this thrum of almost palpable-like energy whenever these two were on the page, and turning my attention away from whatever was going on was an exercise in futility. L.J. Shen has, once again, delivered, and Pretty Reckless sets the bar high. Five-plus stars. ♥